The Iqaluit Airport is more than the gateway to much of the Canadian Arctic, it has a long history that includes having a role in one of world’s largest events.

This dynamic city formed on the banks of the Sylvia Grinnell River became a permanent settlement in an effort to support the Allies and fight the Nazis in Europe.

Join us as we explore the story the founding of the city of Iqaluit and how it helped in World War II.

Things looked bleak for the Allies at the beginning of the war. Paris had fallen in a couple of days and the Battle of Britain made everyone nervous that Britain could fall next.

In those early years of the war, the United States had not joined the war but was providing supplies and aid to the Allied Forces. Churchill and Roosevelt had signed the Lend-Lease Agreement, which gave the U.S. the ability to rent airbases in Europe in return for massive amounts of military aid to be shipped to Europe.

This essentially ended the U.S.’s position of neutrality in the war but not directly entering it. The U.S. sent a total of $690 billion to the United Kingdom, the Soviet Union, France, China, and others. This included everything from food, oil, materials to warships, planes, and other weaponry.

The big problem was getting all those supplies to Europe. Since these war supplies were going to the Allies, the Axis would seek out the ships and try and sink them. The German U-Boats were especially successful.

This meant that North America would have to come up with a new way to get to Europe.

In 1940, the United States began to work on a plan to build airfields in the Eastern Canadian Arctic in order to provide hemisphere defence and an air route to Europe. By building a northern air route they could bypass any naval threat and could continue the flow of supplies into the war.

A team from the United States Army Air Forces led by Captain Elliott Roosevelt, the son of the president, began surveying Frobisher Bay and the shorelines of Baffin Island.

After finding some mediocre locations they were led by their Inuit guide, Nakasuk, to a level meadow next to the Sylvia Grinnell River.

“The terrain was excellent, with level ground extending nearly the entire 6,000 feet needed for an ample runway…The harbor, readily accessible from the bay, offered a good anchorage for ships of any size that would come in.”

Due to the heavy losses at sea and the urgent need, this plan was quickly developed, and the airstrips and bases built. Ever since Denmark had fallen to the Axis in 1940, Greenland had come under the United States protection and control.
This allowed them to build an airbase on Greenland allows the war supplies to be flown across the North Atlantic never travelling more than 1,296 km (700 nautical miles) over water.

This air route was originally referred to as the “Northern East Staging Route” but was soon called the Crimson Route. It was believed that it gained its name because it would be the route home for the casualties of the war, referring to the crimson blood. However, the project did not last long enough to gain extensive use.

In reality, Crimson was the code-name for Canada and most of the route was in northern Quebec or on Baffin Island.

While Iqaluit is no longer an air force base, it is one of the most important airports in Nunavut. With so many small communities and hamlets across Baffin Island and the surrounding islands, the Iqaluit Airport is a busy place.

This modern airport is a quick flight from Ottawa’s International Airport, making the Canadian Arctic incredibly accessible for anyone.

If you’ve ever wanted to explore the Canadian Arctic and Nunavut’s historic capitol city then visit our Getaway Trips.

At night you will go to our Northern Lights lookout where you will have a photography workshop to help you take breathtaking photos of the aurora dancing above.

Find out more about our Iqaluit Getaways here. 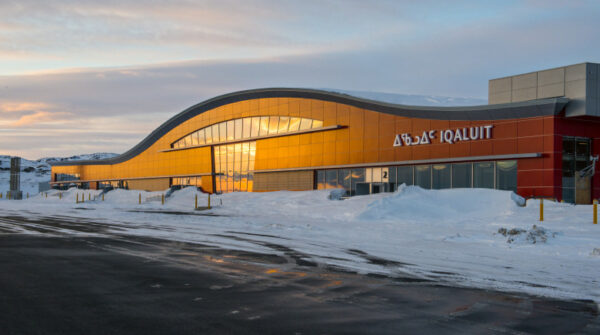 We now have a Gear Shop where you can browse some of the best outdoor clothing and equipment to buy or gift to friends and family.