Our Founder and President: Graham Dickson 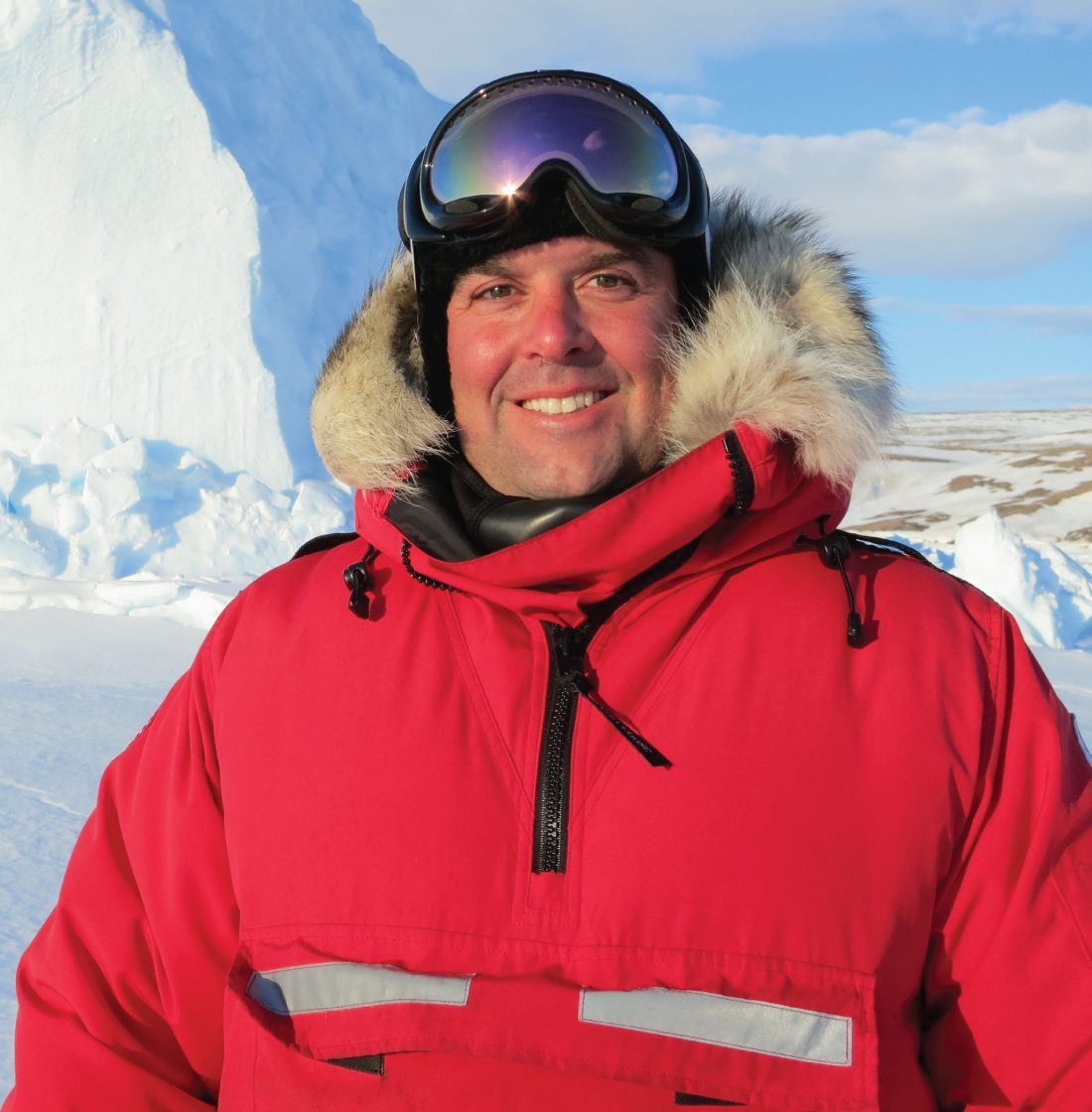 As Arctic Kingdom’s fearless leader, Graham’s two decades of experience in the Canadian Arctic are behind every adventure. Since the inception of Arctic Kingdom, he has led and overseen hundreds of major expeditions for adventurers, professional photographers, divers, film crews and scientists.

AN ARCTIC EXPEDITION & TOURISM PIONEER
Graham is the founder of Arctic Kingdom, an industry leader in the development and delivery of exceptional Arctic travel and authentic wildlife experiences, and a specialist in polar logistics for film and science.

Since 1999, Graham has led and overseen hundreds of major expeditions for adventurers, photographers, divers, film crews and scientists, from Alaska to the Northwest Passage, Hudson Bay to Ellesmere Island and Greenland to Svalbard. Arctic Kingdom, under Graham’s leadership, has operated expeditions over the past two decades to view, photograph, film and dive with walrus, bowhead whales, narwhals, belugas, and polar bear as well as caribou, muskox and wolves.

Graham was the primary advisor and expedition leader for all Arctic scenes filmed over three years for Disney Nature’s Oceans and dozens of productions since.

Graham holds a Bachelor of Applied Science in Mechanical Engineering from the University of Pennsylvania and is a Fellow of both the Royal Canadian Geographical Society and the British Royal Geographical Society. He is a PADI Master Dive Instructor. He is a member of the Nunavut Film board, has served on the Management Committee for Auyuittuq National Park and on the board for Nunavut Tourism. He is featured in the book Face to Face: Polar Portraits by the Scott Polar Research Institute.

Graham was the honoured recipient in 2019 of the Pioneer Award at the Spirit of the Arctic Tourism Summit.

A multilingual leader, skilled in organizing logistically demanding expeditions, Graham is focused on innovations in Arctic travel, combining the best of traditional knowledge with cutting-edge transportation and camps to take visitor experience to new heights and come closer towards realizing the potential of the tourism industry. He and his wife live in Iqaluit.

A former marine biologist, Kristyn was moved by the wildlife, landscapes and people of the north on her first trip to the Arctic in 2004. She has since guided more than 40 expeditions in the Canadian Arctic, Alaska, and Greenland. Kristyn plays a vital role in Arctic Kingdom’s expeditions, field operations, and business processes. She also manages large specialty projects, such as Crystal Cruises, and expeditions for film crews including National Geographic, Disney and BBC.

Meet Thomas, an outdoorsman with an international business degree. His love for travel and wildlife led him to Belize in 2015, where he worked for an international marine conservation non-profit. Here, he organized voluntourism expeditions in the remote atolls and islands off Belize, Honduras, and Panama.
After a couple of years in the sun, he soon caught the Arctic bug and began working for Arctic Kingdom as our Expedition & Field Coordinator. He now uses his passion and his knowledge to ensure the safaris run smoothly, organizing travel and field planning, and working with local guides and expedition staff.
He splits his time between our office and the onsite management of some of our most exciting trips across the Arctic from Arviat, Nunavut to Lapland, Finland.

Dave has worked all over the globe and has called Arctic Kingdom his home for a decade, leading most of our expeditions. With a passion for photography, Dave has captured many memorable moments from our trips. View Dave’s photography on Instagram @davebriggsphotography

Meet Jaime “JB” Sharp, a guide, instructor, writer, photographer, and of course, an adventurer. His passion for the outdoors has led to incredible encounters with Arctic wildlife and has taken him to remarkable locations in his kayak.

JB is drawn to how humbling adventures can be, big or small, and the chance to share intimate moments with animals in their natural habitat.

What can we learn from someone with his experience?

“Stay Curious, Calm, and Compassionate. Be open to new experiences and don’t shy away from discomfort.”

You can follow Jaime on his adventures at @jaimesharp_adventures

Johann has always had a keen interest in the Arctic and its culture. Originally an Environmental Impact Biologist/Resource Manager he has travelled extensively throughout the Arctic as well as around the World. Discovering his entrepreneurial roots in his mid 30’s, Johann moved on to establish a design and manufacturing company building numerous innovative design patented products for distribution internationally. Besides establishing and growing his own companies to several million in sales, he has helped numerous companies integrate innovation and new technologies to improve the efficiency and value of their enterprises.

He holds a Commercial Pilots License with both fixed-wing and helicopter time, is an offshore sailor, diver, internationally rated Polo Player, backcountry and kite skier, as well as several other adventure-based sports.

He is an acknowledged expert in northern logistics, transportation and equipment. He currently is currently an Advisor and Head of Special Projects for AK. In order to not be confused with his son Johann J S Sigurdson IV, who also works with AK, he prefers to be called “Johann the Wise”.

Meet Patrick, a food guru, wild mushroom forager, writer/poet, and spiritual life seeker. This will be his seventh Arctic Kingdom expedition as a chef. His time with Arctic Kingdom has taken him to four locations across the Arctic, so he certainly has a taste for adventure.

Patrick has been featured in media for being a Wild Edible Chef and his mushroom foraging. He looks forward to sharing his passion for nutritious and delicious food.

If you get a chance, ask him about the time he helped a baby deer find its mother.

Meet Travis, a guide who enjoys all types of adventure since he was a kid. He was able to live out a dream when he ski toured through Wells Gray Park on a 350 km self-supported trip through untouched landscapes.

He enjoys skiing, canoeing, hiking, reading and spending time with his family. But he looks forward to the remoteness and disconnect of life at camp. There, he appreciates the chance to exchange stories, share in the chance to experience such a magical place, and learn from the Inuit.

Even though he has personally had up-close encounters with wolverines, grizzlies and cougars, he can’t wait to get back out there. His words of advice: “live life simply and be flexible.”

Meet Emri, an avid outdoorsman and wildlife enthusiast that turned his passion into an impressive career as a polar bear guide that leads expeditions focused on Arctic environments. He is captivated by the unique characteristics of wildlife and the range of environments that make this planet extraordinary.

Emri became a guide because he always looks forward to learning from the Inuit guides and the chance to share this amazing experience with the guests. He enjoys making people feel comfortable in wild environments and looks forward to introducing them to polar bears.

Want to find out more about the Arctic? I’m sure Emri will share some of his tales of wildlife encounters and retracing Sir Franklin’s voyage through the Northwest Passage.

The spirit of adventure has taken Françoise to some of the most remote and challenging places on earth. A polar guide, adventurer and conservationist, Françoise has participated in a number of oceanographic explorations, led expeditions across the Arctic, and is a member of The Explorers Club. She shares her passion for wild places through her award-winning photography. In fact, she was recognized in the Wildlife Photographer of the Year for 2019 competition and her photo The Challenge was chosen for their Top 100 to be featured in the travelling exhibition.  View Françoise’s photography on Instagram @francoisegervaisephotography.

An award-winning filmmaker who specializes in underwater and extreme environment expeditions, Nathalie joins the Arctic Kingdom team on our dive expeditions. She is an accomplished explorer, dive instructor for Trimix, cave and rebreather diving, and commercial diver. She shares her passion for geology and marine life through film and photography. View Nathalie’s photography on Instagram @aquapixnat.

“We have been to over 70 countries around the world, including the north Col of Mt. Everest by helicopter, and this trip beat them all!”