1. What do Bowhead Whales eat?

Bowhead whales eat up to 2 tonnes of food every day. Annually Bowhead whales should be eating up to 100 tonnes of food. Bowhead whales feed by swimming with their mouths open. They filter their food through baleen plates, keratin bristles equipped to sift out water and catch zooplankton to feed off of. The majority of their feeding takes place during the summer months in the Canadian Arctic.

2. Bowhead whales can live beyond 200 years

One of the longest living mammals in existence, scientists have estimated that bowheads can live from 100 to over 200 years. 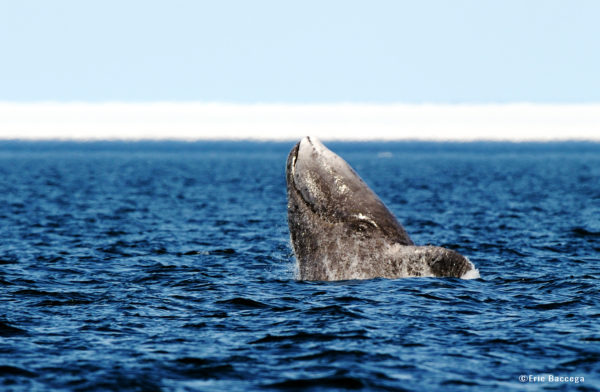 3. They are named after the distinct shape of their heads

Their massive bow-shaped heads are used to break through thick sea ice up to 60 cm (23 in). A bowhead’s skull makes up one-third of their total length. The classification refers to the baleen plates, made of keratin, on both sides of their upper jaw.

6. They can get rowdy in quiet Arctic waters

Bowheads are known for their intense social group interactions. These interactions involve breaching (leaping out of the water), tail and flipper slapping. 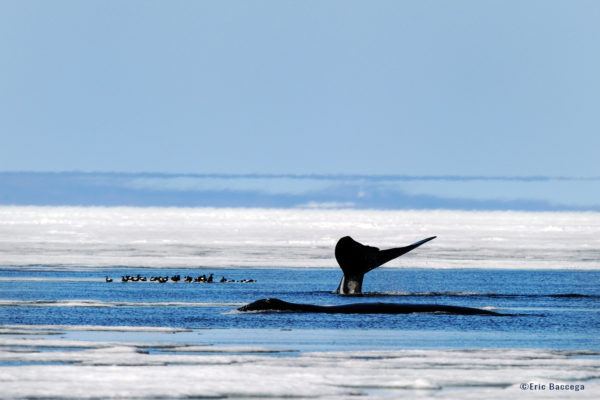 Despite their enormous size and weight, bowheads are able to breach entirely out of the water! 8. Thick layers of blubber keep them warm in Arctic waters

One of the most interesting Bowhead whale facts is that they have the thickest coating of blubber of any sea mammal, with layers up to 50 cm (19 in) thick! Blubber maintains warmer body temperatures so animals, like bowhead whales, are insulated throughout all of the Arctic seasons.

Located on the steeple (small hump on their back), both blow-holes sit side-by-side. Baleen whales need to absorb more oxygen to support their massive bodies during a longer-lasting plunge. Like other Arctic whales, narwhal and beluga, bowhead whales don’t have a dorsal fin. Other whales have dorsal fins on their back; the triangular protrusion that often pops out over the sea surface. The absence of a dorsal fin allows bowhead, and other Arctic whales, benefits suited to their environment, including: preventing heat loss, reducing surface area, and allowing them to swim under ice sheets.

Want to see bowhead this year?

Contact one of our Arctic Travel Advisors. We can build a fully-customized itinerary to bring your Arctic dreams to life.