One of the most elusive animals on Earth, it is no wonder so many travellers want to know where to see narwhal. Narwhal watching is one of the most sought-after experiences for Arctic visitors. Known as the “unicorn of the sea” these mythical whales spend their whole lives in the Arctic waters.

The Canadian Arctic is home to estimated 80,000 narwhal – about 75% of the world population. Their seasonal migration is highly reliable as they return to the same locations year after year in pods that range from 15-20 and as high as 100. And in summer numerous pods may gather in groups of 100-1000. 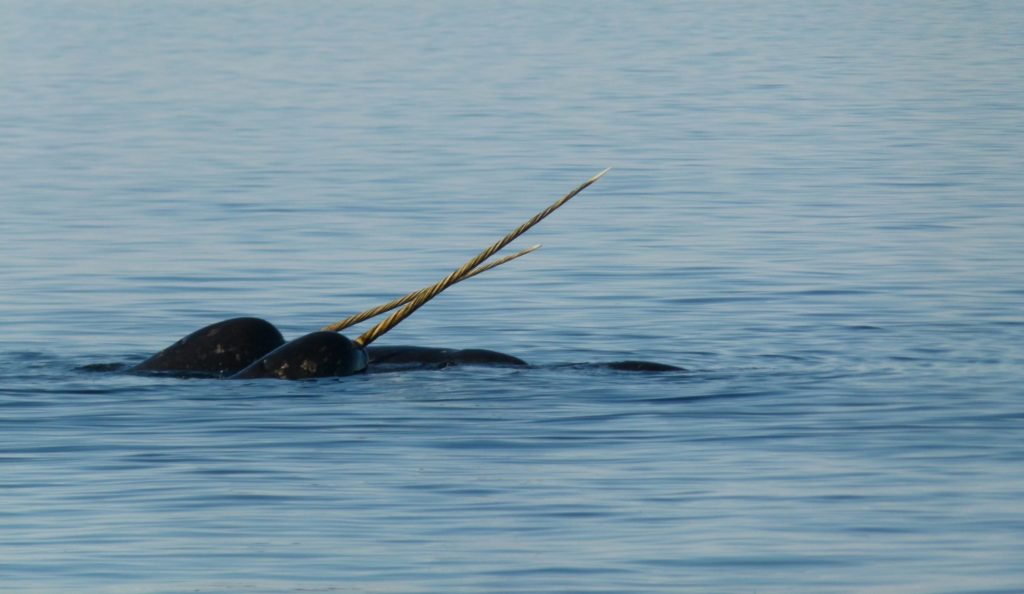 The months of May and June are the best time to see narwhal as they swim close to the floe edge.

They make their way around Baffin Island and Bylot Island as the ice begins to melt. At this time of year, narwhal leave their winter home between Greenland and Canada in Davis Strait and head towards their summer territory. Narwhal pods begin to travel closer to the coastlines and can be found exploring the gradually receding floe edge. 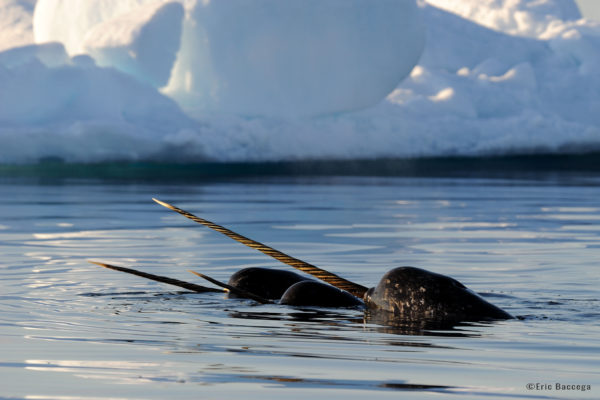 Where to see narwhal in spring

If you’re wondering where to see narwhal, the best answer is at the floe edge of Lancaster Sound in May and June. This area is considered one of the most prolific wildlife areas in the Arctic. They have been known to linger and take their time swimming westward through Lancaster Sound towards their summer feeding grounds.

This is by far the best opportunity to see them as they travel close to the floe edge. Incredibly, narwhal tend to seek cracks in the same places each year. It is believed that their tusks hold a sensory function and can pass on information and communication for the sake of this migration through the emerging ice break-up.

You can get opportunities to see narwhal up close at the floe edge on Narwhal & Polar Bear Safari.

In late June, narwhal travel out of Lancaster Sound to areas like Admiralty Inlet, Prince Regent Inlet and Eclipse Sound, and have even been seen in Cumberland Sound.

In summer months they return to ice-free summer territories, which are usually in more shallow waters. Even though narwhal one of the deepest divers of all marine mammals, during the summer they will only dive from 30-300 m and spend more time at the surface.

Where to see narwhal in summer

Although they can be expected to swim further from shore in summer, you can get opportunities to see them as they hunt for their summer diet of mostly Arctic cod, Greenland halibut, and polar char.

In September and October narwhal will travel back through Lancaster Sound on their way out to Baffin Bay and Davis Strait. This is a round trip of roughly 3,000 km each year. At this time of year, it is extremely rare to see narwhal as they race against the cold before the ice freezes.

Known as “Arctic specialists” for their yearly residence, narwhal are deeply dependent on specific climate trends as creatures of such strict migration habits. Shifts in the climate affect them most in the autumn as they need to make it through Lancaster Sound before it fully freezes.

By the time winter arrives, narwhal can be found roaming between western Greenland and Canada spending their winter far offshore in Davis Strait and Baffin Bay. Narwhal winter in the pack ice and spend up to seven months under almost complete sea ice cover, with less than 5% open water.

Narwhal are so uniquely adapted to the Arctic that they can spend as long as 25 minutes underwater, and more than three hours a day below 800 m depths. Cracks in the ice allow them to breath before they dive again, sometimes as deep as 1,500 m, as they hunt for Arctic cod, squid, pelagic shrimps, and benthic prey. They wait for spring between Canada and Greenland before travelling northwest again through Lancaster Sound and into the archipelagos of the Canadian Arctic for summer.

Since narwhals have never been successfully kept in captivity, the only way to see them is in the wild. For those seeking narwhal encounters, a trip to the Arctic is well worth it for chances to see this iconic whale of the North.

Get opportunities to see narwhal on these trips:

Contact us for more information how to see narwhal or to book your narwhal tour.