This top predator is famous for the amount of territory they cover during the winter when the sea-ice creates an endless platform. But when they return to their shoreline homes about 60% of polar bears live on Canadian and Inuit territory. 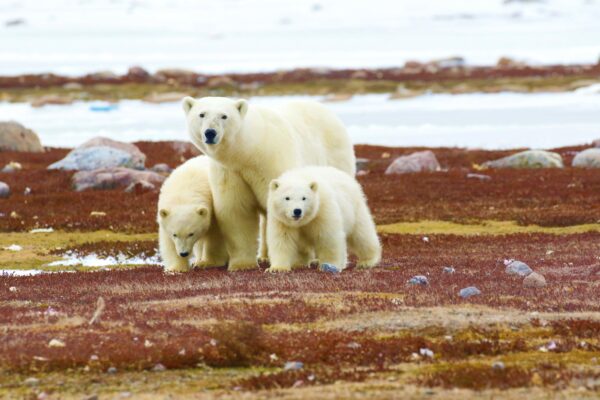 Get To Know Canada’s Polar Bears

There is an incredible relationship between Canada and polar bears. They are a symbol of Northern strength and resilience.

With the southernmost polar bears ranging as far as James Bay where the Cree call them wapusk and as far north as the tip of Baffin Island and Ellesmere Island where the Inuit call them nanook. Their Latin name Ursus maritimus meaning ‘sea bear’ refers to their dependence on the Arctic waters.

We know population sizes for the most part due to the push for the conservation of polar bears thanks to the 1973 Agreement on the Conservation of Polar Bears where all five nations with polar bear populations began tracking numbers and created legislation to protect them.

To monitor populations their territories were divided into subpopulations that could be tracked by local traditional methods and scientific studies.

The five ‘polar bear nations’ were divided into 19 subpopulations with 14 of these sections within or overlap with Canada.

Why Baffin Island is the Best Place to See Polar Bear

Considering Baffin Island is the largest of Canada’s Arctic archipelagos it is one of the most picture-perfect places to experience a polar bear tour.

Towering granite cliffs and mountains that burst from the sea, Baffin Island is a dramatic place for breathtaking photographs and an unforgettable adventure.

Imagine spotting a polar bear napping among icebergs or stalking below a mountain ridge as it points its nose high to the wind.

Our experienced Inuit guides know the land and wildlife better than anyone. Travel to known polar bear areas to each day and take in the pristine landscape of that the Baffin Bay subpopulation call home.

The large number of polar bears within the Baffin Bay subpopulation make Baffin Island’s eastern shoreline an exciting and active area. Here you have the chance to see polar bear cubs in the spring newly exploring this snowy realm.

In the summer they retreat to the coves and hillsides of Baffin Island, which is a great opportunity to spot when their white coats stand out against the dark rock.

If you are interested in seeing polar bears in their natural habitat than you’ll want to explore our Polar Bear Tours here.