What is the difference between the Arctic vs Antarctica? Both polar destinations can be extreme but spectacular for travellers seeking a unique trip. Both the Arctic and the Antarctic are vast and remote, considered the last untamed wildernesses in the world. When choosing polar destinations, Antarctica is often top of mind for many people but the Arctic offers distinct and incredible travel experiences.

The distance between the two polar regions is 20,117 kms (12,500 mi). But the wildlife, landscape and local culture really sets the Arctic and Antarctic apart.

For those wondering what makes these polar opposites so special, here are the key differences:

The Wildlife: Arctic vs Antarctica 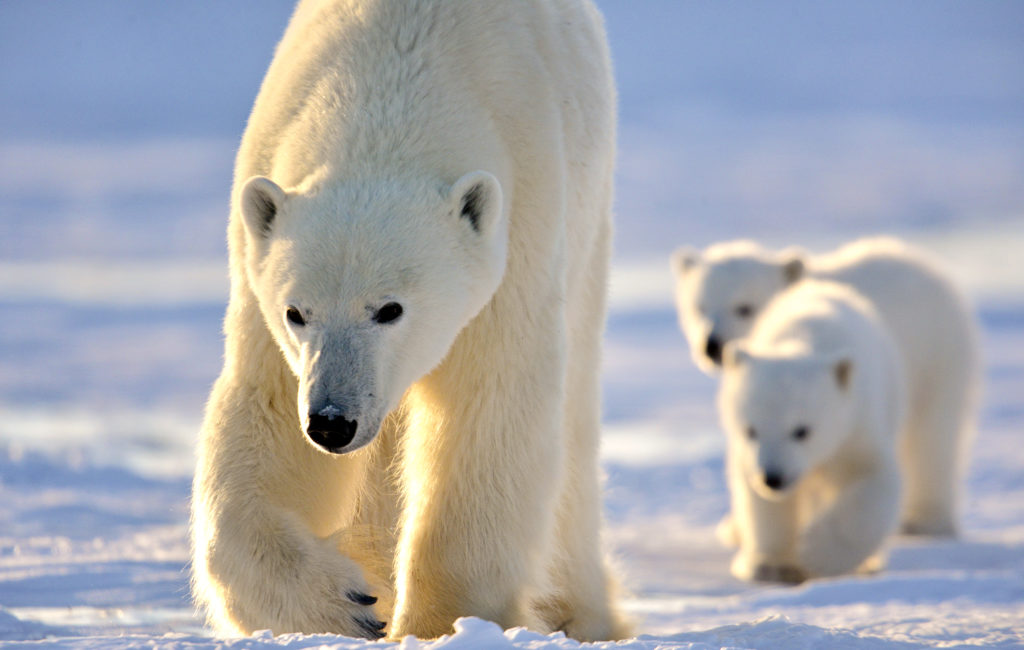 The most frequently asked question about these two poles is “what wildlife can I see?”

As a whole, the Arctic is home to far more animals than the Antarctic. This is helped by the fact that Arctic territories are connected to continents like North America, Europe or Asia; while Antarctic is a harsh and isolated continent. In fact, the largest land animal on the continent is a wingless insect.

The biggest celebrities of the North and South poles are the polar bears, narwhal and penguins, both exclusive to one of the hemispheres. 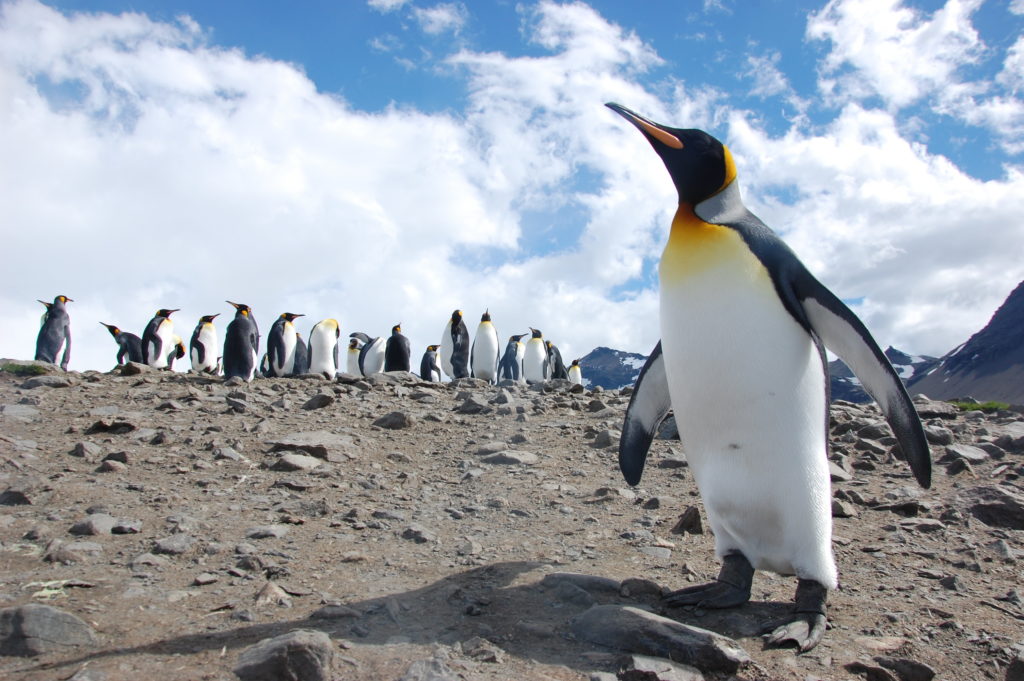 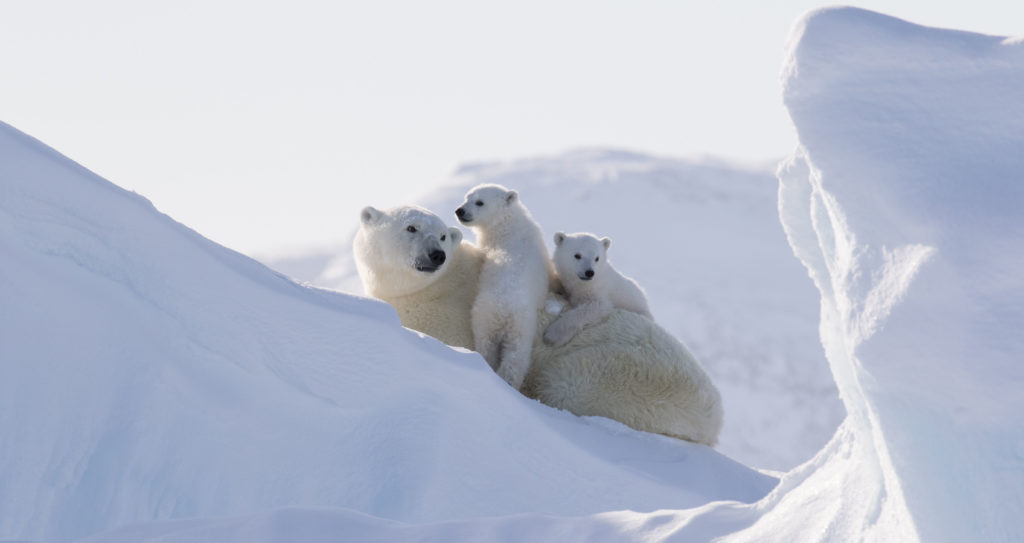 Polar bears and narwhals are only found in the Arctic. Canada alone is home to 60% of the world’s polar bear population and 75% of the narwhal population.

In the Arctic you can find many animals roaming the land such as: Arctic fox, Arctic hares, seals, walrus, caribou, reindeer, musk ox, lemmings, squirrels, many species of birds, and of course, polar bears. It is also home to many species of whales like narwhal, beluga, bowhead, and some orca whales. 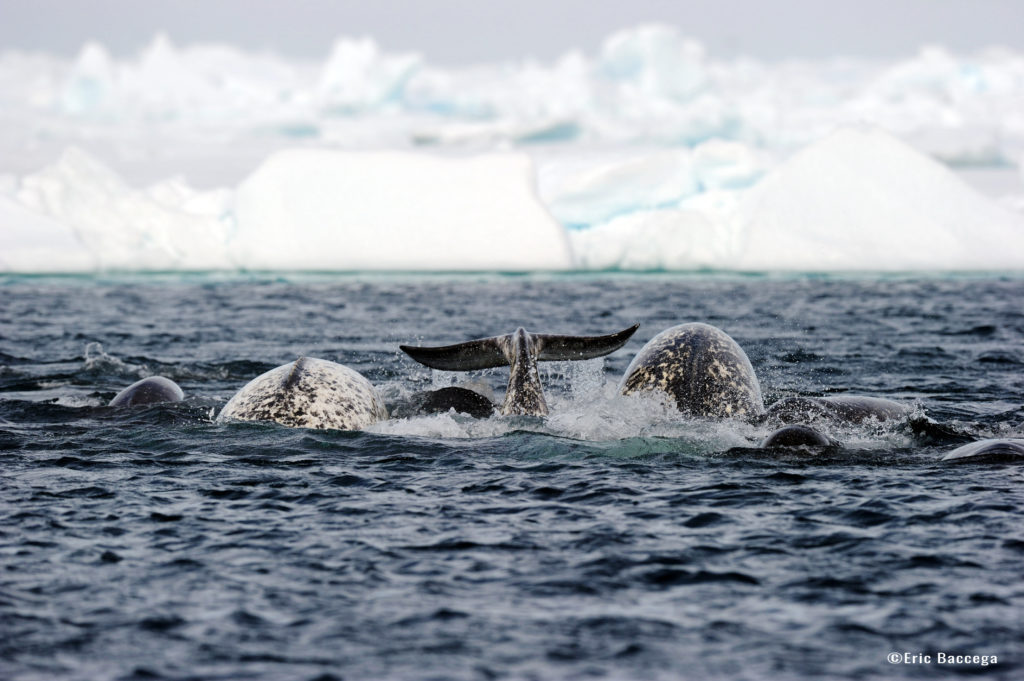 The Land: Arctic vs Antarctica

Landscapes of the Arctic

Geographically, the Arctic is made up of portions of eight different countries: Canada, Greenland, Russia, Norway, Sweden, Finland, Iceland, and the United States. 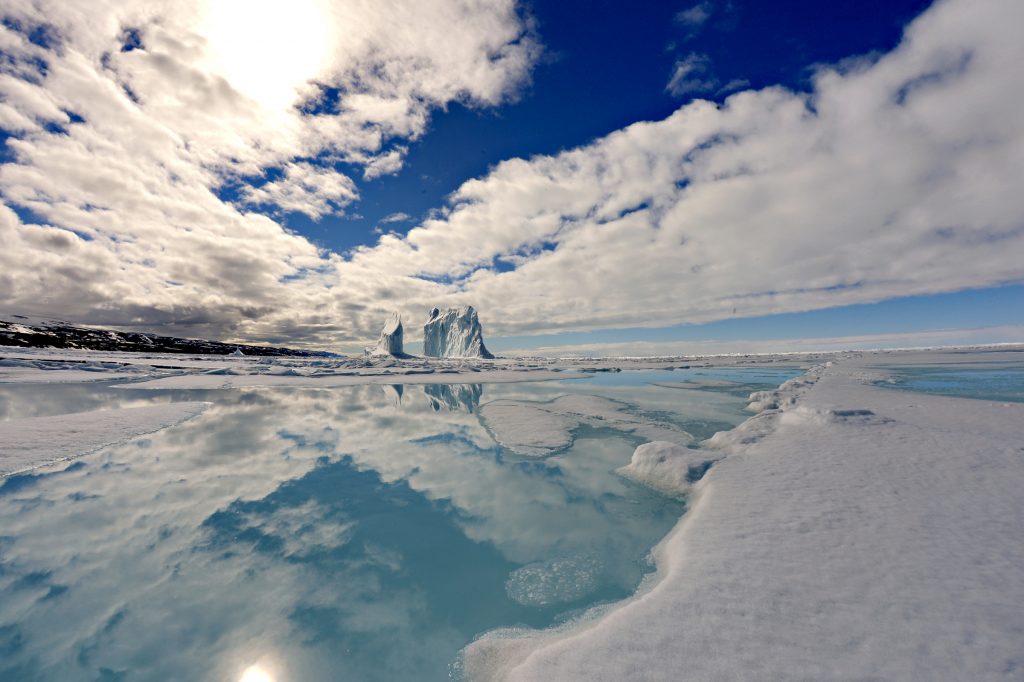 The North Pole is a point in the middle of the Arctic Ocean that is permanently covered in sea ice. It is located 700 km (430 mi) north of the nearest point of land, the northern tip of Greenland.

To the north, Greenland has the second largest polar ice cap next to Antarctica. With Jakobshavn Isbræ being the largest glacier in the Northern Hemisphere, this is where most of the icebergs in the Canadian Arctic start. These icebergs will float past Nunavut, so often that the community of Qikiqtarjuaq has an area known as “iceberg alley.” The iceberg that sunk the Titanic came from here! 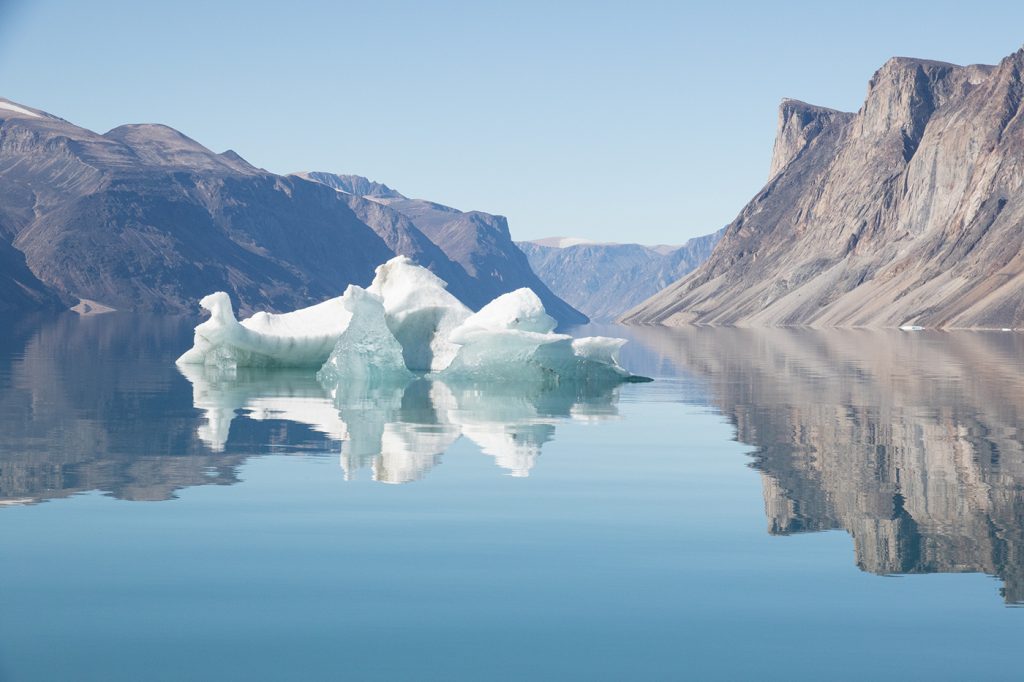 In addition to soaring icebergs, the landscapes of the Arctic include dramatic mountains, fiords and rolling tundra. The national parks of Baffin Island, Auyuittuq and Sirmilik National Parks, are some of the most spectacular natural areas in the world.

Landscapes of the Antarctic 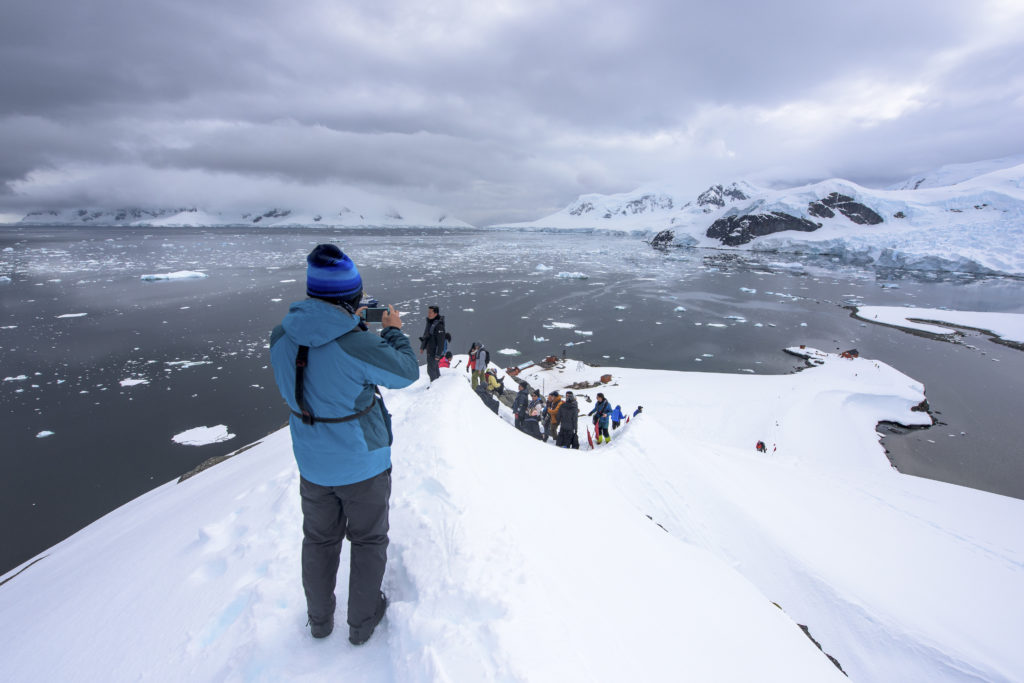 The Antarctic is 98% covered in ice. Its coastline is made up of icy mountain glaciers and smooth ice-sheet. The total surface area roughly doubles each winter as sea-ice forms around the coasts. In summer, the ice breaks ups and the enormous ice-sheets crack and split. This forms giant icebergs that melt as they float north throughout the summer. In the summer, much of the water around Antarctica becomes freshwater from these melting ice-sheets and glaciers.

The Culture: Arctic vs Antarctica 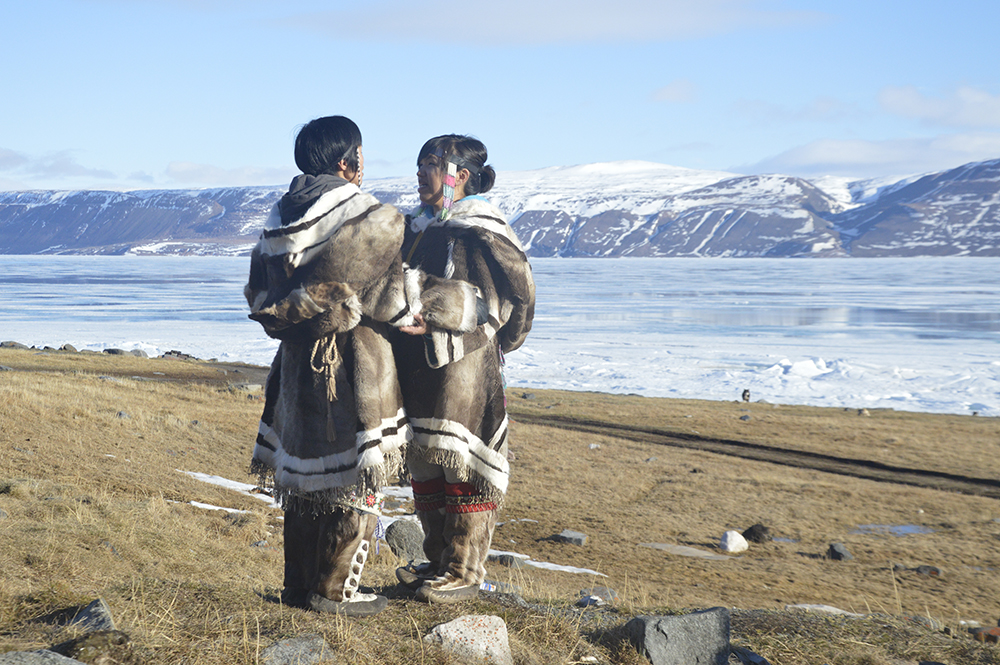 Cultural experiences in the Arctic may include visiting remote communities with historic Viking and Inuit settlements, throat singing or other cultural demonstrations. The Northwest Passage alone boasts a fascinating history of exploration. Interacting with local Inuit and learning about traditional practices is also a highlight for many guests on Arctic Safaris.

Antarctica is the fifth largest continent and the largest to have no permanent residence.  Antarctica does host anywhere from 1,000 to 5,000 scientists each year to conducting research, and tourists from around the world, of course.

The north and south polar regions follow similar patterns for daylight throughout the year, just at opposite times of the year. 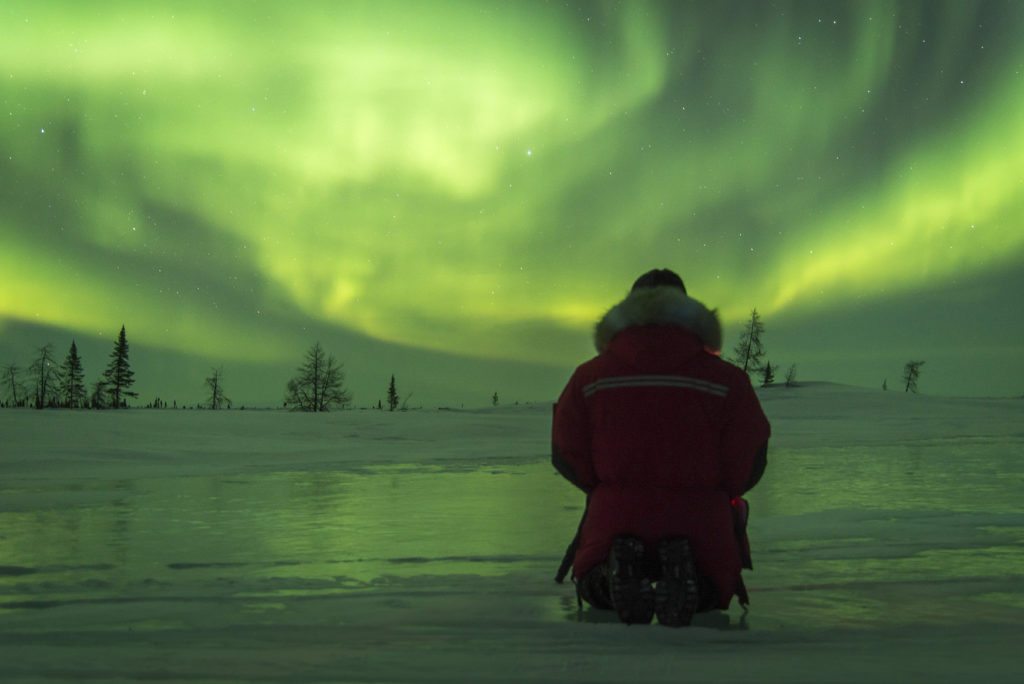 In the Arctic, you can experience 24-hours of sunshine in the spring and summer – May to August. This is also the time to witness wildlife migrations, including narwhal and beluga at the floe edge. Polar bears can be seen almost year-round in different areas of the Arctic. You can get chances to see the Northern Lights from late-August to April.

Antarctica experiences its summer in January. This is when penguin eggs will begin hatching.

February and March mark the best times for whale sightings. 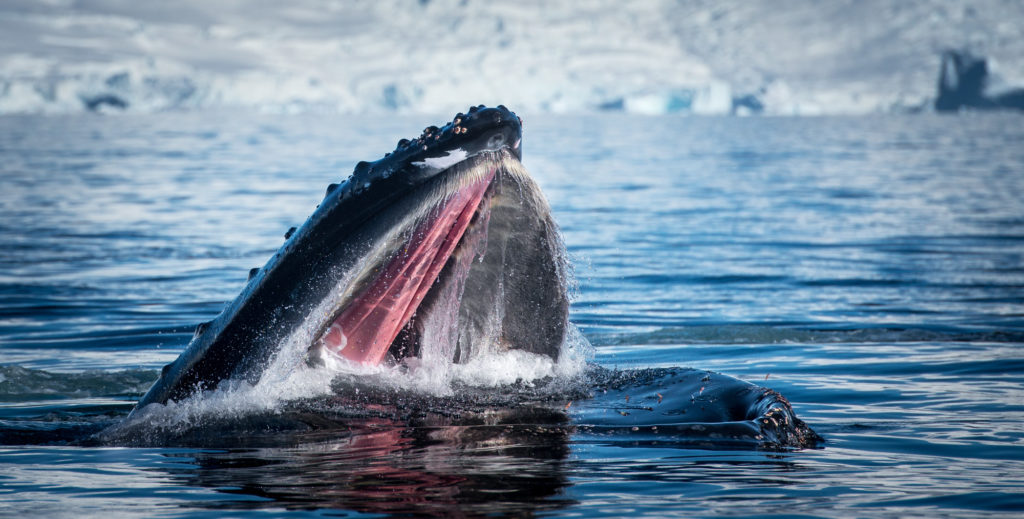 The polar regions offer incredible, life-changing experiences in destinations that few have visited. The breath-taking scenery and iconic wildlife of the Arctic and Antarctic are a must-see for adventurous travellers from around the world. 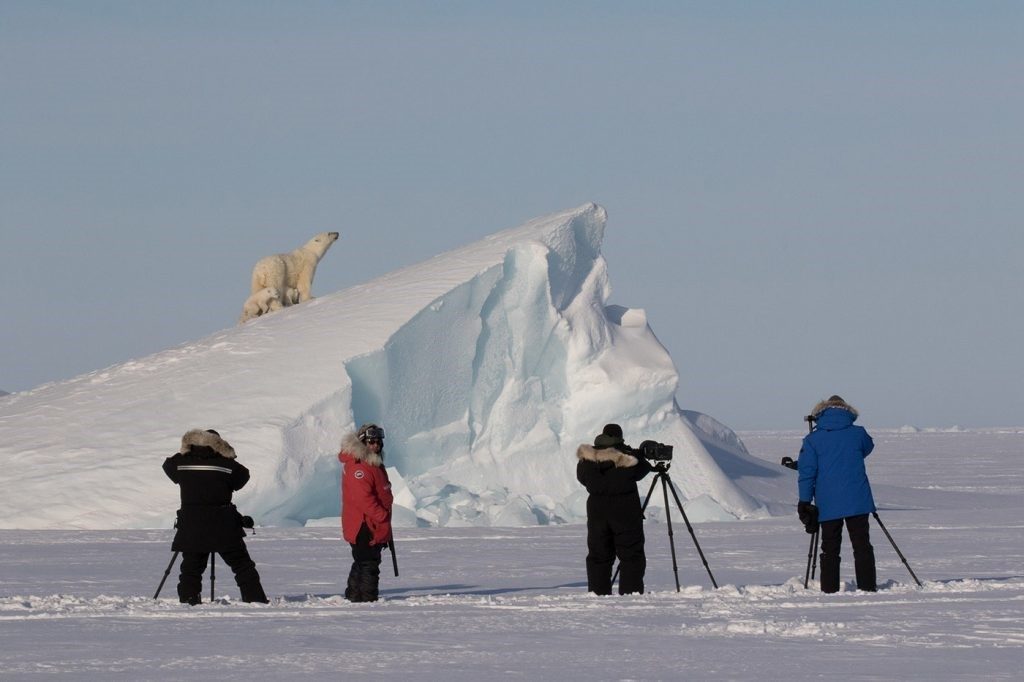 While there are also cruise options for the Arctic, land-based Arctic safaris also offers the incredible opportunity to experience wildlife up-close. You can get some of the best chances to view and photograph iconic animals like polar bears and narwhal on Arctic Safaris including Narwhal & Polar Bear Safari.

You can view all other Arctic Safaris here. 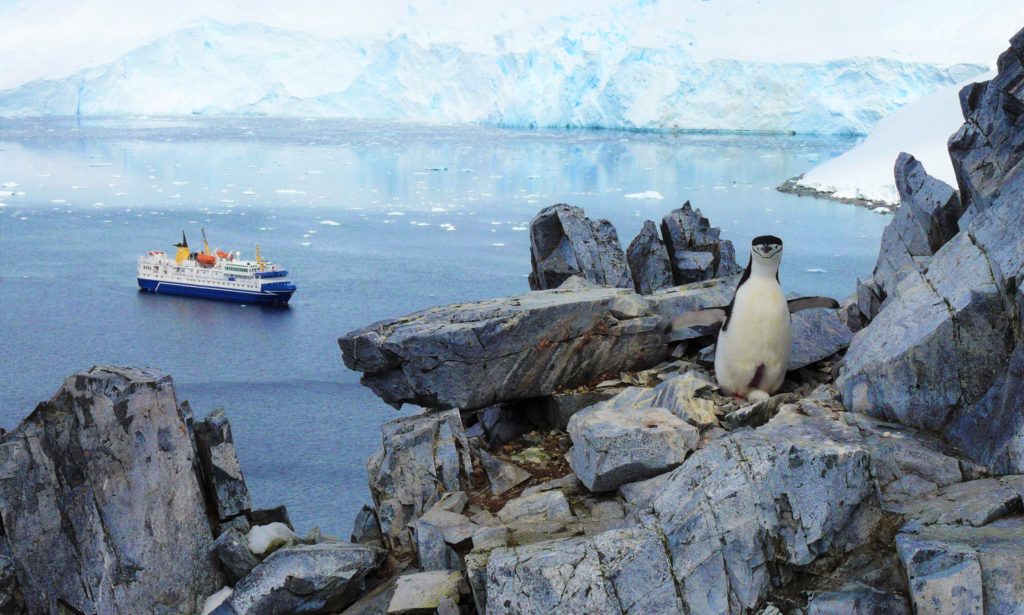 When it comes to visiting Antarctica, the majority of travel options are via cruise. Antarctic cruises provide opportunities to see whales and other wildlife. There are also Antarctic fly and cruise options for those that opt to skip the tumultuous Drake Passage.

Want to experience the Arctic?

Contact our Arctic Travel Advisors today to find out how you can get opportunities to view wildlife including narwhal, polar bears and more, among spectacular landscapes and experience the rich culture of the Arctic.