In the spirit of International Polar Bear Day, we are excited to highlight this day because we love polar bears. They are perhaps, the most iconic image of the Arctic, with their fluffy fur roaming their habitat hunting seal, foraging in the off-season, a caring-mother bear with her cubs or swimming among icebergs. Countless images of polar bears in any setting conjure thoughts of the Arctic. 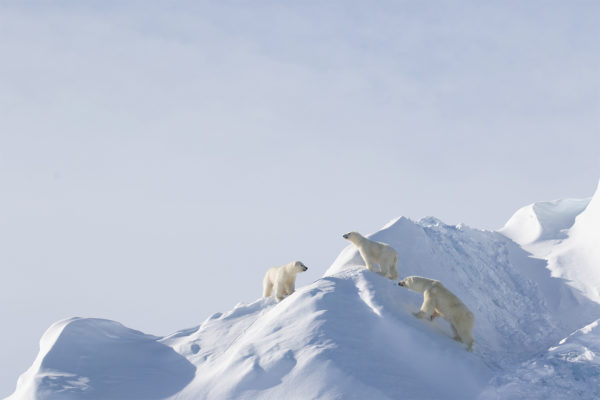 They may be the most defining image of the Arctic and have evolved over centuries to adapt to their Arctic domain. But they are undergoing a shift in an environment that is changing their habitat.

In this special report, we will highlight the incredible ways that polar bears have transformed from a brown bear that ventured further north into the King of the Arctic.

Darwin says, “it’s not the strongest of the species that survives, nor the most intelligent that survives. It is the one that is most adaptable to change.” What better example than the polar bear. It has been shaped by its Arctic environment and has undergone remarkable evolutionary shifts in order to adapt to this landscape. 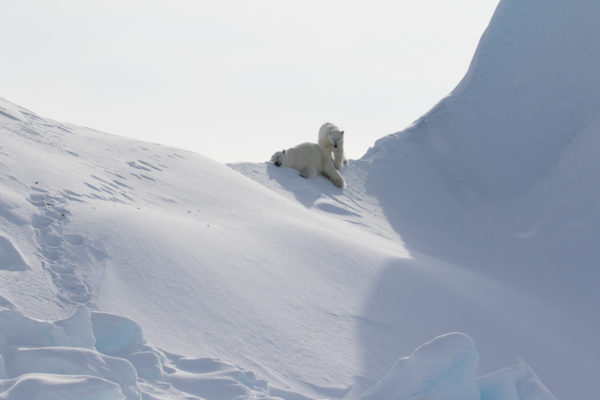 We now believe that the first polar bear would have been born to a brown bear, but research continues to verify. From a mutation in its genetics one cub was born with seemingly white fur. This would have helped camouflage itself in the snow and would also help this bear to be more successful hunting in this environment. This led to the bear growing stronger and therefore more likely to reproduce and pass on this genetic trait. 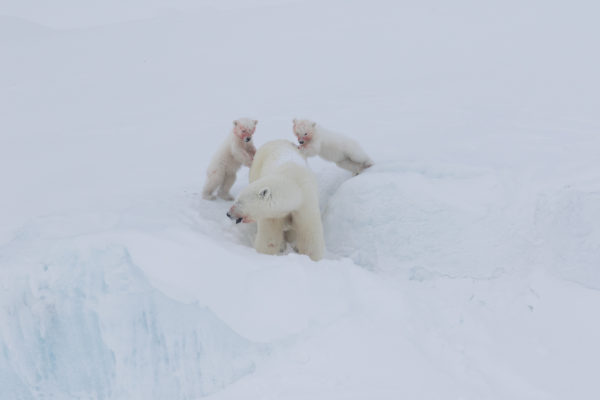 It would have taken a very long time for this genetic trait to become dominant in order to produce more bears that had camouflaged fur and create the species of polar bear. During this time the bear evolved in other incredible ways to fit its new habitat and hunt its new food sources.

There were fewer plants and vegetation in the Arctic, so the polar bear evolved to have different claws then brown bears. The long claws for digging up vegetation evolved to a shorter claw to help them walk on the ice and they developed little sticky bumps on their paws, called papillae, that help grip the ice. 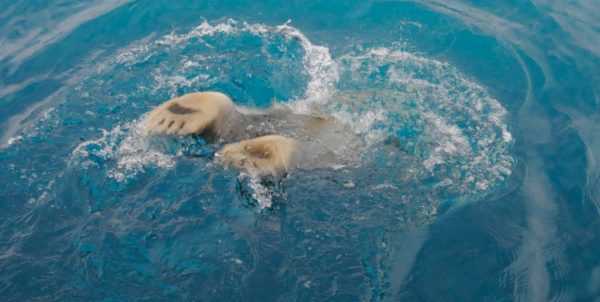 The sea-ice is so vital to polar bears that they are considered marine mammals. This is also due to the fact, that their food primarily comes from the water and how much time they spend in water or on sea-ice. Since the sea-ice became so vital to their lives it became important to adapt in ways to help them hunt and survive. For example, they stopped hibernating because winter was the most successful time to hunt.

Did you know that polar bear hair isn’t actually white? Their hair is transparent and hollow. This helps scatter sunrays instead of absorbing them to prevent the bear from overheating from the intensive sunlight during summers. Their hair is even water repellent to allow them to shake the water off after a swim. 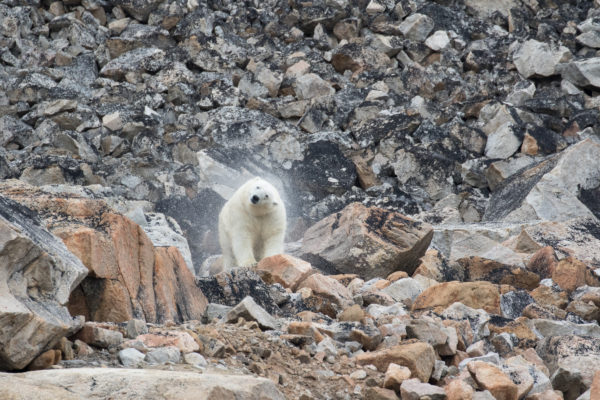 Hunting in the Arctic

That’s just the physical evolutions of this remarkable bear. The ways they hunt have become ingenious and maximize their strengths over their prey. Polar bears can’t digest carbohydrates or proteins as well as brown bears do because they now rely on blubber for the majority of their calories. They can eat over 100 pounds of blubber in one sitting and are incredible at assimilating the fat they eat into their own body fat. This helps them last through extended times when their regular food source is scarce, like summer. 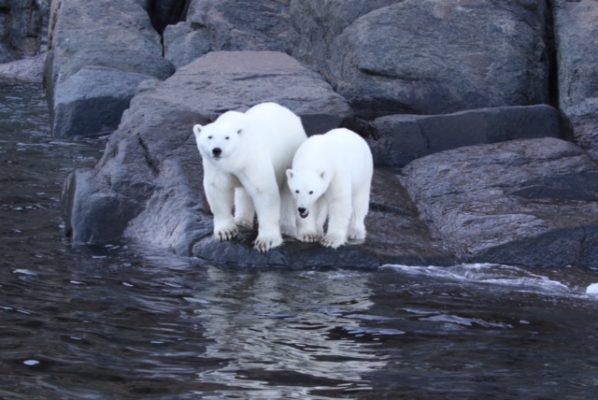 Since they are so dependent on hunting on the sea-ice in the winter they have learned incredible techniques. Polar bears are masters of calculating reward over energy consumption. They don’t bother with birds because chasing them burns too many calories and primarily eat ringed seal specifically for their enormous blubber content. 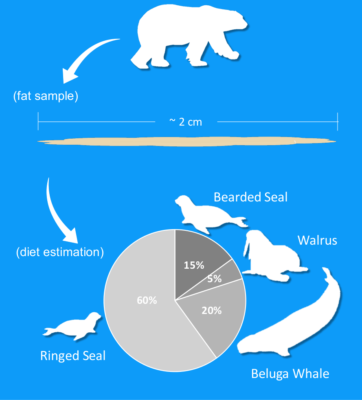 Preserving energy is so vital to them that their preferred method of hunting is to wait at a seal’s breathing hole for them to appear. Considering ringed seals are known to rotate through up to 12 different holes it can be a waiting game but that’s how these bears like it. They will wait for hours without moving because the sound of a single shift on the ice can scare the seal away.

Yet it’s not always a waiting game. Their outstanding sense of smell allows them to smell prey from over a kilometer away and 1 meter under snow. This helps them sneak up on prey. Since they have better eyesight than seals, they use this to keep an eye on their target as they maneuver and sneak closer to the unsuspecting prey. You may find them sneaking behind snow banks or swimming around floating ice drifts to get close enough to pounce.

When all else fails another technique is to walk to cracks in the ice or the floe edge, where the land-anchored ice meets the open water. Here polar bears hope a whale or seal will pop up close enough to the edge of the ice that they can reach it before it dives underwater again.

Although they are marine mammals, they are at a disadvantage in the water chasing prey. It’s capitalizing on the sea-ice that is so vital to their hunting and why sea-ice is so integral to their survival. 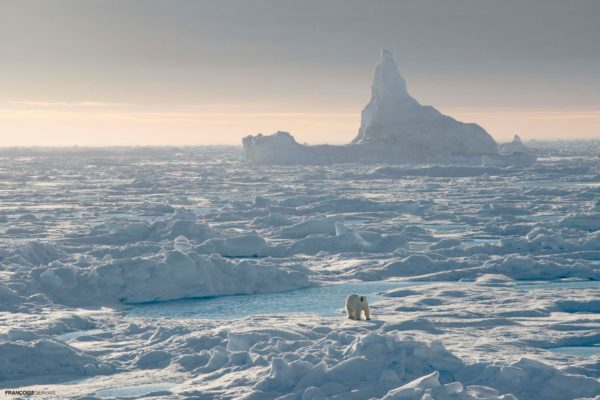 We know how important sea-ice is to polar bears. They don’t just live on it but rely on it for food. So, shifts in that environment can have an enormous effect on polar bears.

Our climate is shifting, and our planet does undergo long-term climate cycles, but it is changing more dramatically and faster due to human effects. And it’s important to express the difference between weather and climate. Weather relates to how it may have rained the last couple days or that it’s a warm day today. Climate is related to the fact that the last five years have been the hottest five years on record. 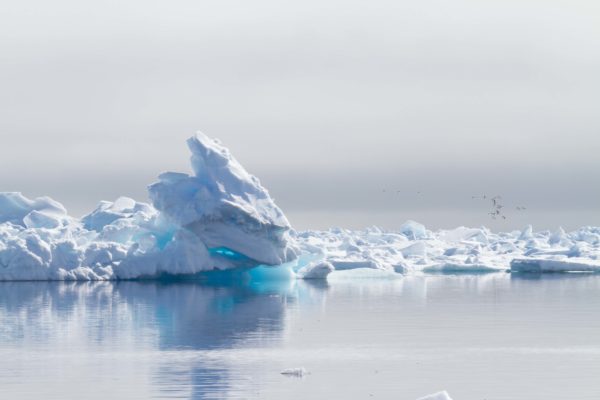 By burning fossil fuels, we are releasing a blanket of pollution that sits inside our atmosphere and prevents the planet from releasing its seasonal heat. Over 97% of climate scientists agree that human activities are significantly affecting the current warming and related climate disruption. See how sea-ice has declined in the Arctic:

This is affecting polar bears in every facet of their lives. Polar bears are the canary in the coal mine when we talk about climate change. We’re seeing this incredibly adaptable animal attempt new ways to find food while interacting with the changes to its environment.

Polar bears are moving further south into communities because they’re adopting new hunting practices. If the sea-ice isn’t forming, they can’t hunt on it. If they can’t hunt on the ice, they can’t hunt seals, which forces them to look for new food sources. That means the smell of a town’s garbage dump is more appealing than ever before. 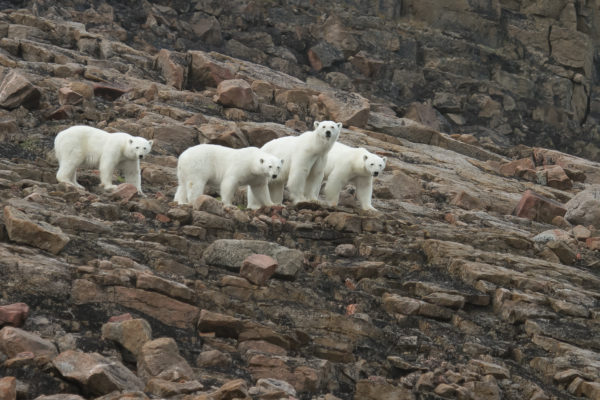 Lately, we’ve seen a mass of polar bears taking over a town in Russia. And on Wrangle Island in the East Siberian Sea, roughly 230 polar bears were found feeding on one whale carcass. Which is incredible considering they are known to be solitary creatures that famously don’t share.

Or in Kaktovik, Alaska bears descend in hordes near the town where locals dump the bones. The town has been using this spot to dump bones from whales for centuries. But the polar bears are coming now because their habitat has shrunk and drawing them to these other food sources that endanger locals, as well as the polar bears.

How can we help? We can act in moderation. Our planet is like a body. It can regenerate and heal itself if we let it. We don’t have to stop emitting carbon, we are incredibly lucky to live in this time of airplanes and central heating. But we can be conscious of our footprint and try to reduce the amount we emit. Ignorance and indifference are a form of environmental pollution and a mistake only becomes an error if we refuse to correct it. Let’s see how much we can help mother earth and the polar bears. 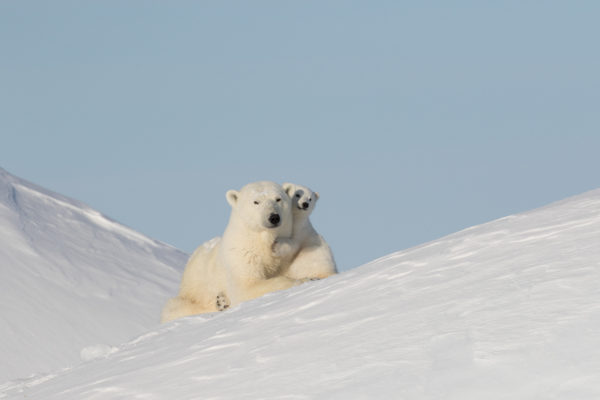 We’ve seen how polar bears are remarkable animals that have evolved to excel in a remote environment and are adapting to a changing habitat. There are incredible examples of ways to help. In the 1960’s and 1970’s unregulated commercial and sport-hunting was the major threat to polar bears. But in 1973 Canada, Denmark (on behalf of Greenland), Norway, the U.S., and Russia signed the Agreement on the Conservation of Polar Bears, to regulate hunting and conserve the polar bear population. Never before had the five polar bear-nations (countries with a polar bear population) come together for a wildlife conservation issue and this remains one of the strongest multilateral environmental agreements ever signed.

Before the major threat was hunting. Now the main threat is starvation resulting from a decline in sea-ice. The first step is addressing the problem, now is the time for us to act. If we could curb over-harvesting we can continue to help polar bears and protect the sea-ice they unequivocally need. 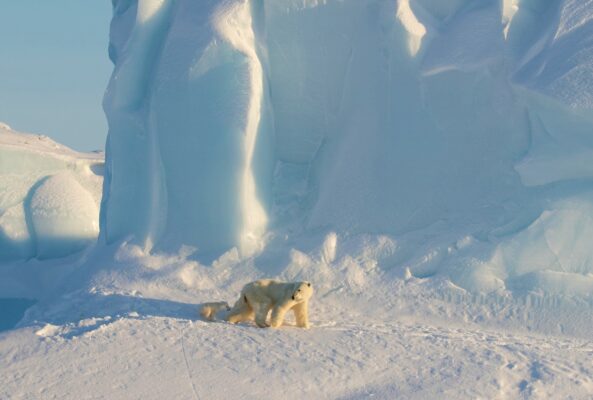 If you want to learn more about polar bears there are incredible resources about this animal and efforts to help. Polar Bears International has many articles about all things polar bear. There are also initiatives to help the effects of climate change on polar bears like their Save our Sea Ice Campaign- SOS! 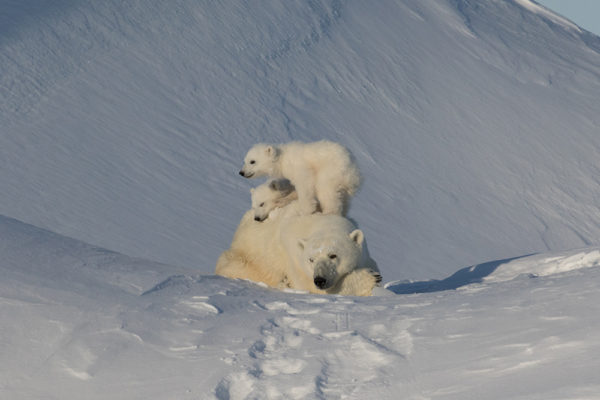 Interested in seeing polar bears in their Arctic habitat? Learn more about our Arctic safaris. A great chance to experience responsible encounters with this remarkable animal. We are simply amazed by this animal and know there is an incredible kinship formed when you observe this remarkable animal in its natural environment. 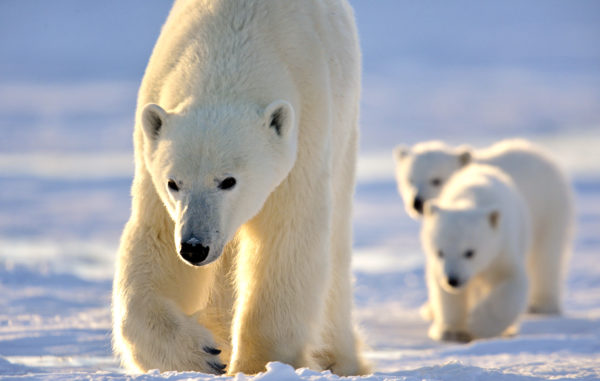 In consideration of working in a changing and fragile environment, our approach to travel – small, land-based groups – ensure we have a minimal travel footprint. Arctic Kingdom is committed to sustainable practices and works closely with Inuit communities ensuring the most appropriate methods are followed. We support and follow the Wildlife Policy of Nunavut, including keeping safe distances from wildlife. By working closely with the communities we operate in we continue to grow strong relations, hire locally, and support local economies.

We are grateful and appreciative of the beauty of the Arctic. Experiences in the Arctic are treasured and never forgotten. It’s a place like nowhere else filled with remarkable animals! 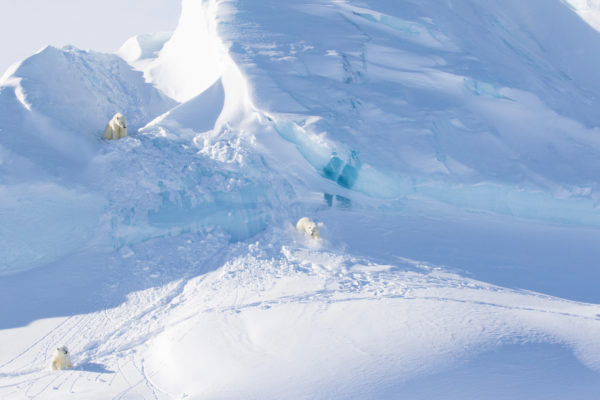 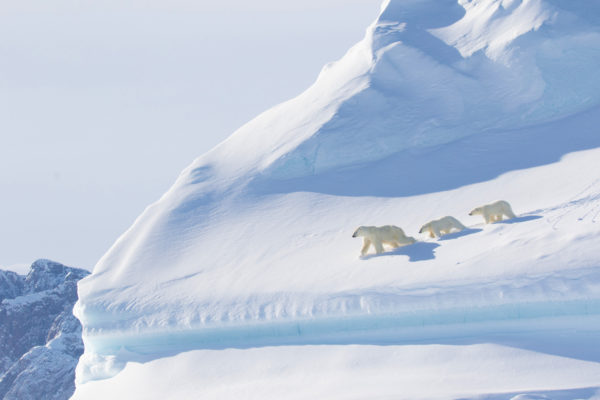