It’s Polar Bear Week, and it’s time to celebrate this stunning animal with all its captivating personality. This also brings up the conversation of the challenges these animals face in an already rugged frontier.

While most of us stay away from things like walking across the frozen ocean and holes in the ice but polar bears need these things and excel in this dramatic landscape.

They may be kings and queens of the Arctic, but they are working hard to manage a quickly changing world. This week we explore the reason why the sea-ice is so important to the polar bear. 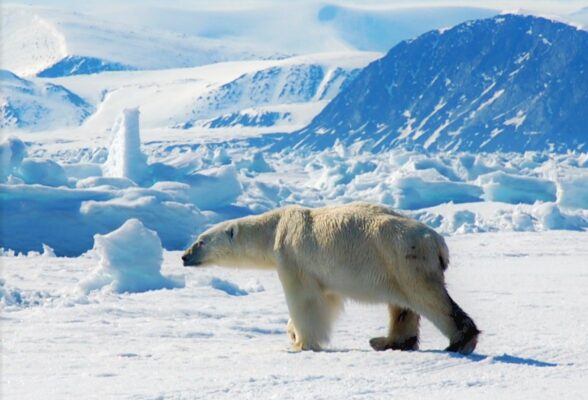 Sea-Ice Levels Are Their # 1 Concern. Here’s Why…

The biggest concern for polar bears may surprise you. It isn’t hunting, which has been strictly regulated for decades now. Polar bears don’t have any other predators to challenge them besides other polar bears. Instead, polar bears’ most significant risk is the accelerated decrease in the Arctic’s sea-ice.

Each year a giant portion of the Arctic freezes over and becomes a nearly endless territory for polar bears to explore and hunt. But if the ice isn’t thick enough or reduced in size, these polar bears have real challenges. Here’s why sea-ice is vital to polar bears.

Simply put, the Arctic Ocean becomes their winter range. As soon as the ice freezes, polar bears across the Arctic World are emerging onto the frozen platform and may not see land again until the ice melts for summer.

So, when you look at a map of the Arctic and see all the blue of the water that surrounds the island and mainland, remember that’s home for the polar bears in the winter.

This vast expanse is perfect for a solitary creature that prefers to limit the competition for a limited food supply. As this apex predator requires so much food to bulk up that it prefers a large range, and the frozen ocean is perfect. 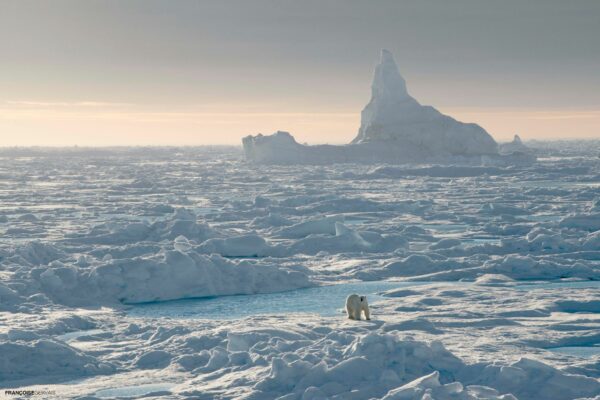 Polar bears live in a world of opposites, and not because the Arctic is so extreme but because they’ve learned to prosper here. They get excited for the long dark winters and dread the warm summer days.

They don’t even hibernate! They can’t sleep away the winter because they do most of the year’s hunting at this time. That’s because when summer comes, and the sea-ice melts, they will go months without a fresh meal. This seasonal fasting puts a giant requirement on the success of winter hunting. They use the ice to navigate a dominion with few obstructions as it is easier to look for prey on the flat ice rather than roaming hills and mountains like other bears.

The sea-ice plays a vital role in the success of their pursuit. In fact, it is the most important tool a polar bear has for its hunt. Here’s why!

The primary food source for polar bears are seals, which are very agile in the water but slow on top of the sea-ice. This is the best chance of catching a seal before it pops back into the hole in the ice and away into the water.

An animal on top of the ice is also their best chance of catching the scent of their prey. You may have seen photos of polar bears standing on their hind legs with their snout in the air. That’s because their remarkable noses can smell animals from incredible distances across the expansive sea-ice to locate an animal close enough to catch, something they could not do in the water.

Without this advantage, a polar bear stands a far smaller chance of catching enough food to maintain its enormous stature. 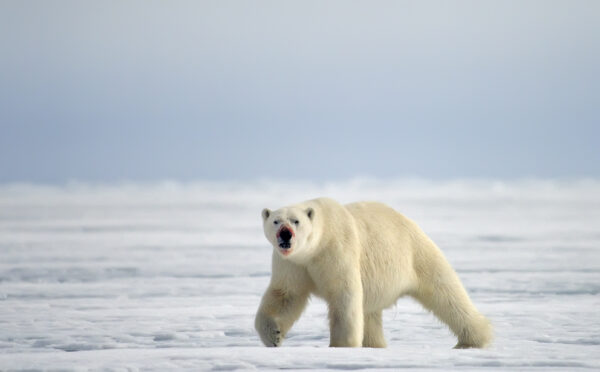 If they can’t hunt seals, they will try more hazardous and unsafe behaviours. For example, film crews are noticing polar bears climbing steep cliffs for a chance at a few spare birds to help them through the fasting season.

Communities have also noticed an increase in polar bears appearing in their towns and dumps. They’ve even started to see multiple bears in the same place, which is very rare for such a territorial animal. This runs the risk of endangering the residents but also increases the likelihood of the bear being harmed.

Polar bears are working hard to adapt to a changing environment and a shrinking range and these are actions that the bears are taking to evolve and adjust their lives to take on a rapid shift in their habitats. We must admit they’re trying!

Now it is time for us to help the polar bear to ensure a safer future for these animals and the Arctic as a whole. That means tackling the primary concern of sea-ice levels. 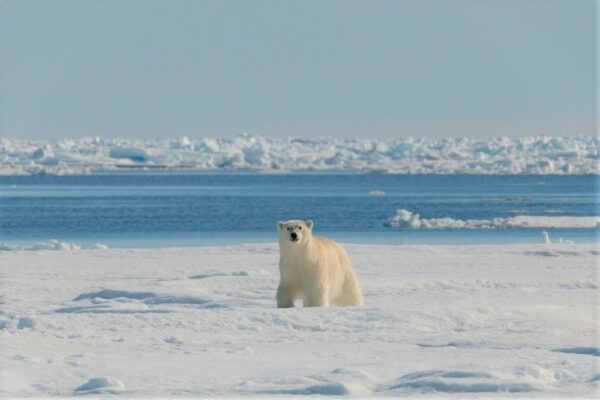 Few things can bond a person to an animal like seeing them in person. Making eye contact with a living creature and understanding its environment’s strains is one of the most important ways of creating new ambassadors for the north.

One of the most important elements of Arctic Kingdom is to create safe and stress-free viewing opportunities between people and polar bears. We believe that once a person experiences the Arctic they are a life-long advocate.

Bonding with an animal, even one so large, is a breathtaking moment. Noticing how it interacts with its environment and other animals is one of the most spectacular feelings that will last forever. Noticing a polar bear move across the frozen sea-ice on our Spring Polar Bear Safari or watching them wait for Hudson Bay to freeze makes the effects feel very real. 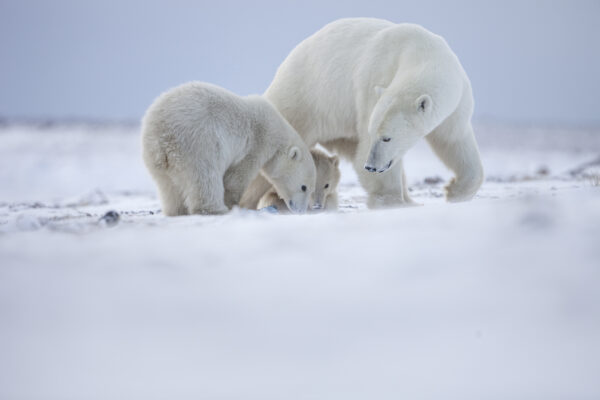 Seeing the changes firsthand brings home the fact that the recent fluctuations are having a very real effect on the north. Our Inuit guides can tell you first-hand what they have seen and how you can help.

I had the chance to talk with one of our Inuit Guides about the shifting environment and how it is affecting the animal patterns in the area in a previous blog: Conversations With The Inuit Guides.

How To See Polar Bears In Their Habitat

We offer exceptional wildlife safaris year-round in the Canadian Arctic with safe and stress-free viewing opportunities.

To find out more about our exciting polar bear tours, then visit our Safaris Page now.

Learn about our once-in-a-lifetime opportunities to see a polar bear in the wild and take in the environment that is essential to these bears and a genuinely breathtaking pristine landscape. 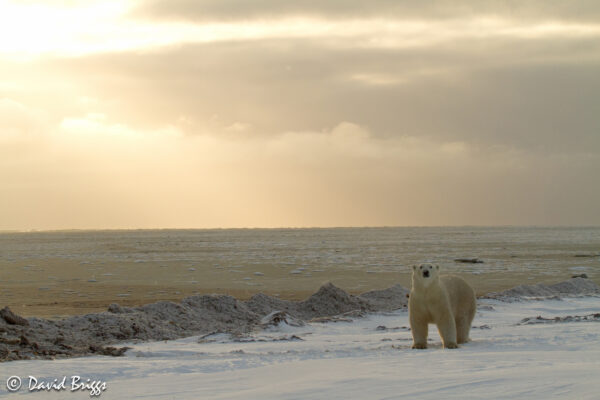 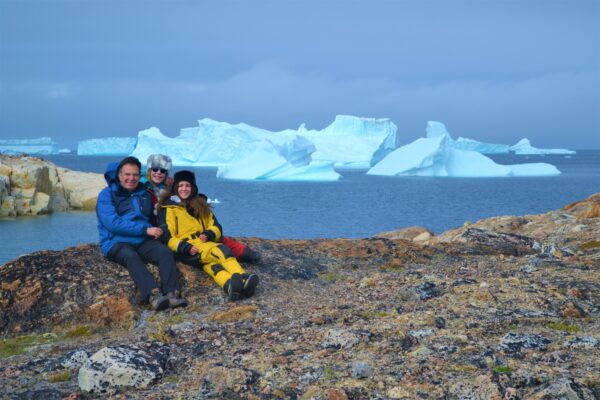