We have noticed the epithet often given to polar bears, “Kings of the Arctic” is unfair and doesn’t do justice to the most important figure in the Arctic, the mother polar bear.

When we think of the sacrifices that mother polar bears endure and the role they play in preparing the next generation of polar bears, it is clear why female polar bears are truly “Queens of the Arctic.” 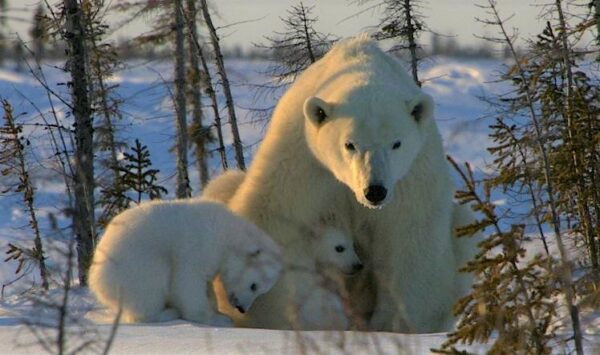 When we consider that for polar bears the winter is their most successful hunting season, where they build up the body mass to last through the slower seasons, it is remarkable the sacrifice mother polar bears experience by giving birth through this season. When they emerge from their maternity dens it is often the end of the frozen season and the beginning of a long season where a lack of sea-ice as a hunting platform makes it significantly harder to hunt and most polar bears tend to fast through the warmer months. 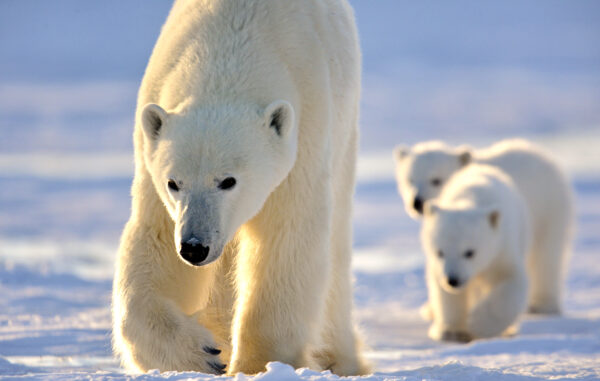 Although polar bears mate during the spring season when they’re out on the frozen sea-ice, mother polar bears don’t actually become fully pregnant until the autumn. They undergo something called “delayed implantation”.

This means that the initial fertilized egg stops growing for the next 4 months. This allows the mother to build up the energy stores and fat content to physically last the long winter without hunting and has the energy to nurse the cub once it is born. Then, after 4 months the egg implants in the uterine wall and continues to develop for another 4 months. 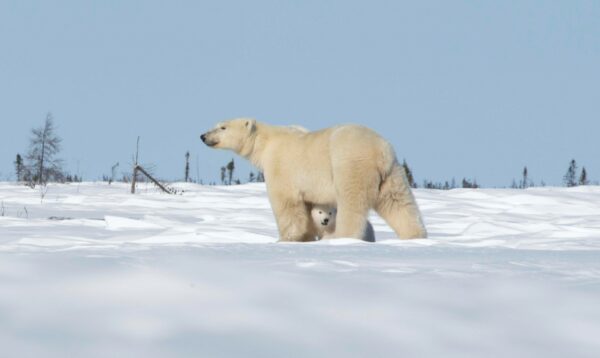 This “delayed implantation” ensures that the mother has the best chance of giving birth and supporting a cub(s) and is in the physical condition to then raise the cub.

This sacrifice of body and time is a lot to endure. A pregnant polar bear must gain at least 200 kg (441 lb) to build up the fat reserves for cubbing, or else the egg is absorbed and does not fully gestate. With this mass gain, a mother polar bear can weigh as much as 500 kg (1,102 lb) which is twice their regular weight. 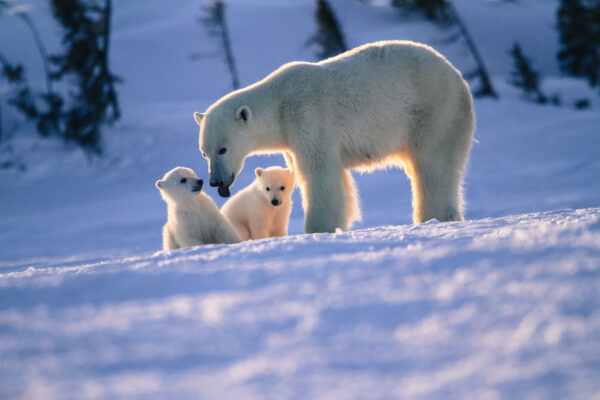 This weight gain becomes vital because the mother will dig their maternity den between October and November and won’t emerge until March or April, having not eaten anything at all the whole time. Cubs are born between November and January and the mother will begin nursing a cub up to six times a day for the first four months.

The average fat content of polar bear milk is 33%, which is much higher than a human with 3-5% fat content. This is aimed at quick development and weight gain for the polar bear cubs. A cub is born weighing roughly one pound and when they leave the den they weigh as much as 22-33 lb. Consider the effects this has on a nursing mother. 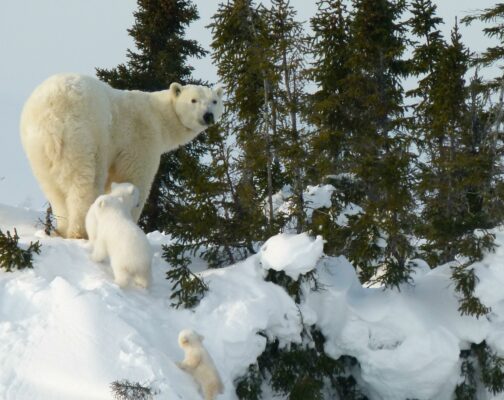 Mothers tend to give birth to twins but sometimes will have one cub and even more rarely three. The cubs will nurse from the mother for the following 18 to 30 months. Some will ween off nursing after 18 months but still stay with their mother for a total of 2 to 3 years as they learn to hunt and tricks to surviving in the Arctic landscape.

As soon as the new family emerges from their maternity den they will start the walk from their inland sanctity to the coast, often up to 16 km (10 mi) away, to begin hunting and a chance for the mother to have her first meal. 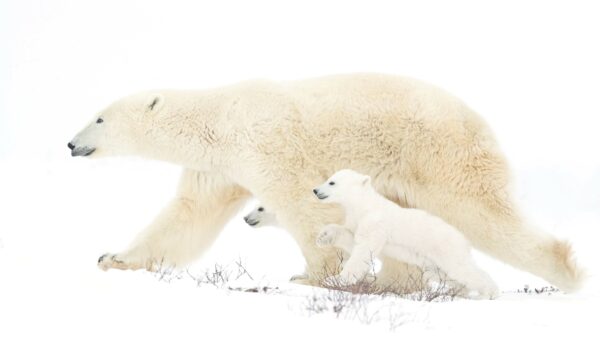 Training The Next Generation

It’s an obvious statement to say there wouldn’t be a next generation of polar bears without females bears since male bears still play a part in impregnating a partner, but that is where the duties of the male bears stop. It is the mother that will give birth and raise the cubs.

Her sole focus is entirely on the development of the cub, going four to eight months without food or drink while they are in a den dug into snow or peat soil just a little bit larger than the mother herself. The den is aimed at providing a secluded and temperate environment for the fragile newborn cubs. Their baby fur is very fine and provides little insulation yet, and the cub is blind at first. 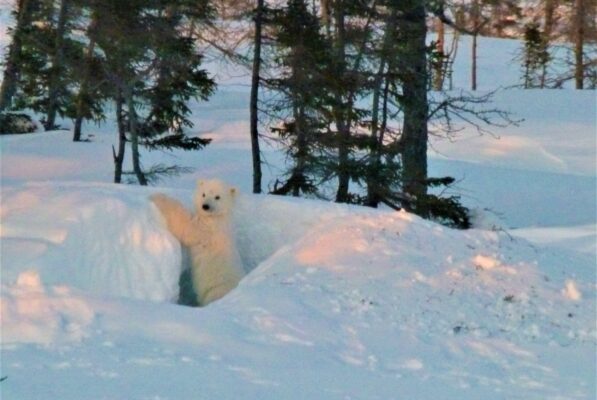 When they emerge from the maternity den between March and April, the mother and cub will remain near the den for about 12 more days. This allows the cub to start to acclimatize to the colder weather outside and develop their walking muscles near the protection of the den.

The mother will then lead the cubs towards the sea ice to begin hunting again. This walk to the sea is often slow and full of distractions as the cub plays in the snow and gets used to walking on ice. Mothers will often carry cubs on their back through deep snow and over water because their fur and fat insulations have not developed to keep the fragile cubs warm. 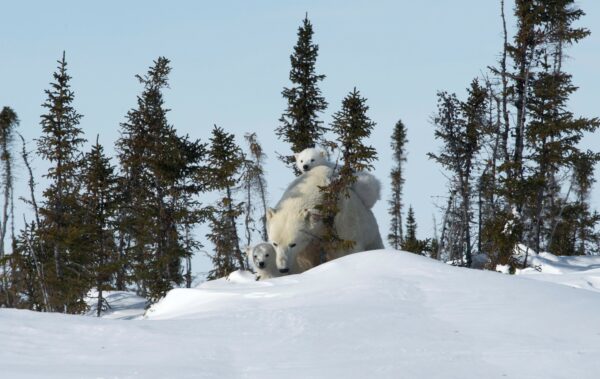 Cubs will often start eating solid food as soon as the mother makes her first kill, along with nursing from the mother. The cubs will spend the first year mostly watching their mother hunt and learning the techniques for catching seal.

The cub may start trying to hunt within the first year but is very rarely successful until their second year. They are still a little clumsy and don’t understand the need for patience. Tricks their mother will teach them can be waiting at a seal’s breathing hole waiting patiently for it to appear or sneaking along its belly or tiptoeing in the effort to prevent any vibrations on the ice that might warn the seal of a coming polar bear. 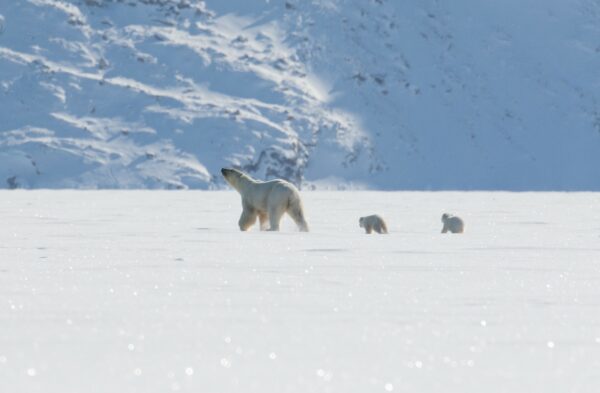 By the time a cub is two years old, they spend about 7% of their time hunting and may only catch a seal every five to six days. Seal is their primary diet because it is the only food source with a high enough fat content and calories to keep a polar bear healthy in a landscape with few resources. 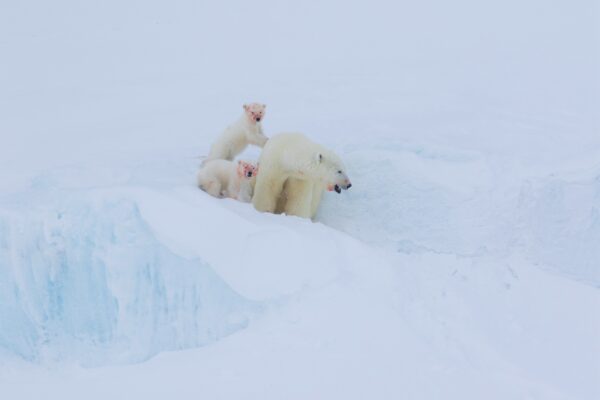 We are constantly amazed by the strength of mother polar bears and the caring attention they give their cubs. We often see cubs crawling all over the mothers back when they take a break. 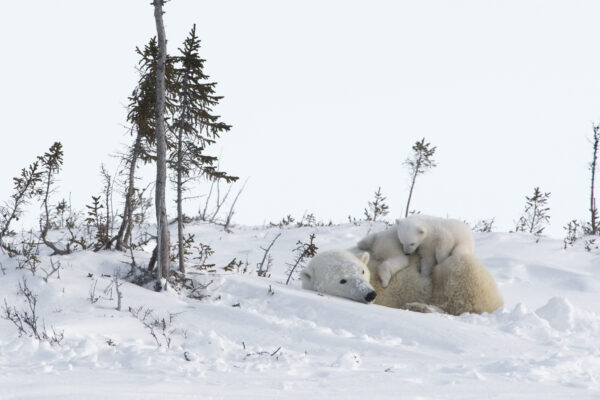 The patience a mother demonstrates when it is sneaking up on a seal and their cub starts to jump or growl, giving away the mother’s hard work. The lengths they go to in protecting the cub from the elements and challenges in the Arctic. 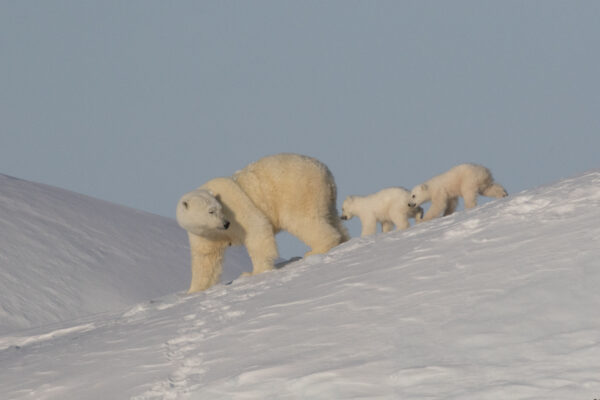 To see the sensitivity of a mother cleaning a cub or the bravado of a cub trying to roar up at its mother is one of the most exceptional moments. 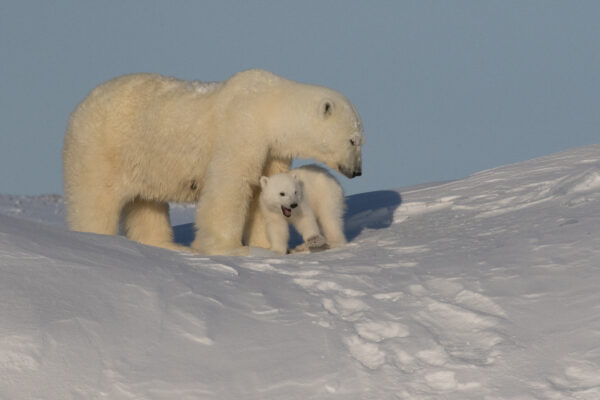 There is a reason we return to these polar destinations and there is a reason our Expedition Leaders and Inuit guides have such a passion for polar bears. They are a statement of resilience in the face of a harsh climate but delicate and loving for the world’s apex predator. 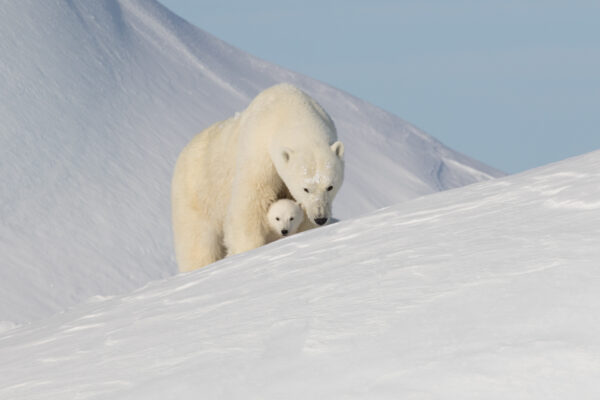 It can not be understated the role and the demands a mother polar bear faces when it gives birth to new cubs. They are solely responsible for developing the next generation and it is their own remarkable knowledge of the Arctic that allows them to pass on their skills to succeed. 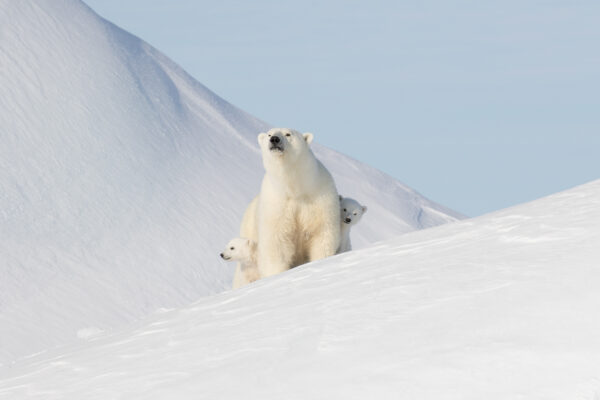 We, at Arctic Kingdom, give thanks to the mother polar bear and by providing safe viewing opportunities with the goal of making Arctic Ambassadors of our guests that visit the realm of the polar bear. We believe that this connection will encourage the protection of these beautiful animals. Seeing a polar bear in its natural environment makes their challenges real but also allows you to experience the tenderness of a mother polar bear to its cub and reminds us that caring for all animals makes the world a better place. 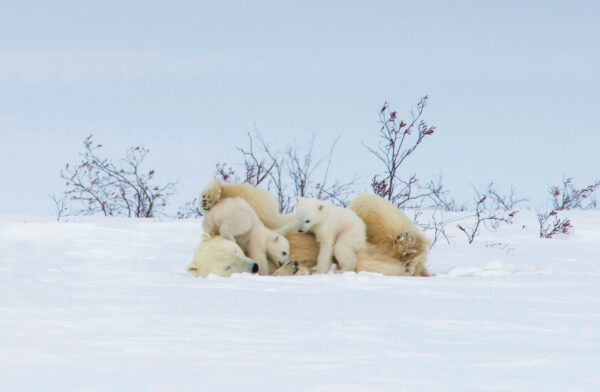 Therefore, on this International Women’s Day we wanted to spend some time detailing the role of the mother polar bear but also to thank all the women in our lives.

If you are interested in seeing polar bears then Arctic Kingdom is the right place. With nearly year-round polar bear safaris in their natural Arctic landscape, we apply our two decades of Arctic wildlife experience to bring you to ideal locations along with the expertise of our Inuit guides to understand wildlife movements to interact safety. 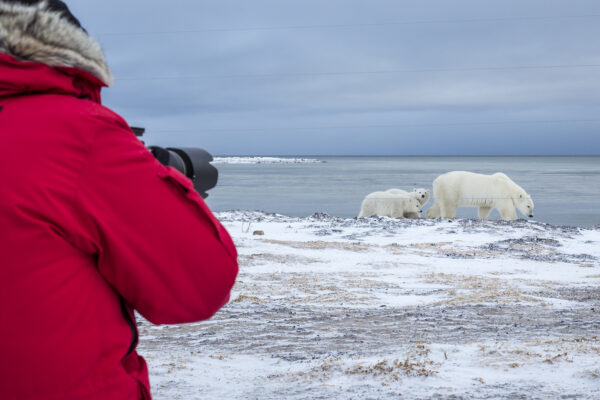 The trip, Polar Bear Mother & Newborn Cubs Safari, takes you near Churchill, Manitoba to Wapusk National Park, the world’s largest polar bear denning area in the world. Get intimate photography and viewing opportunities at the earliest moments as mothers and cubs emerge from their dens to their tundra landscape. 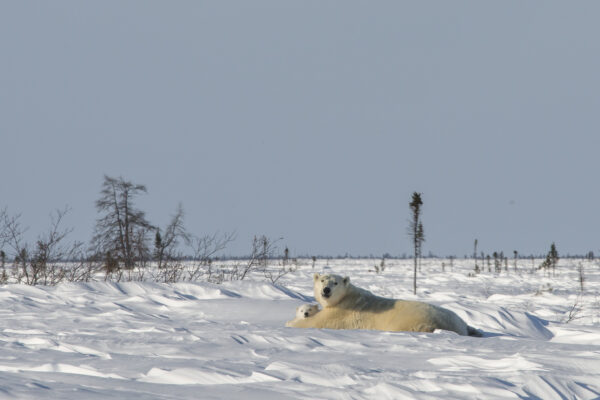 Our Spring Polar Bears & Icebergs of Baffin Island Safari takes you to the eastern coastline of Baffin Island to a frozen world above the Arctic Circle. Here you will travel on traditional Inuit sleds pulled by snowmobiles as you tour the Arctic landscape at a time that mothers are first introducing their newborn cubs to the Arctic icescape. 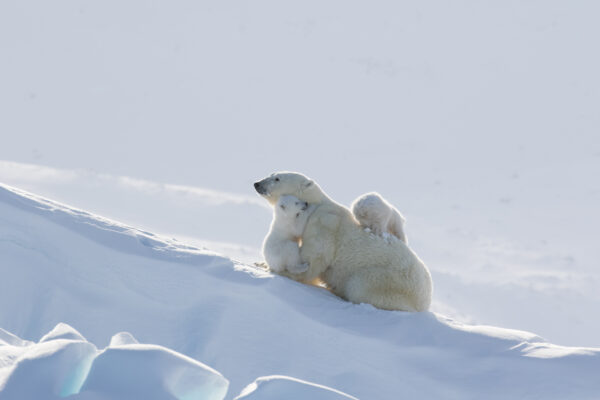 Polar Bears & Glaciers of Baffin Island takes you to the same location as the Spring safari but during the long days of summer when it’s a little warmer and you trade in sleds for a boat that tours the landscape in search of polar bears lounging along the coast on the rocky shores. Here you may find mothers still training their cubs on swimming as it’s often the quickest way to get around the granite fiords. 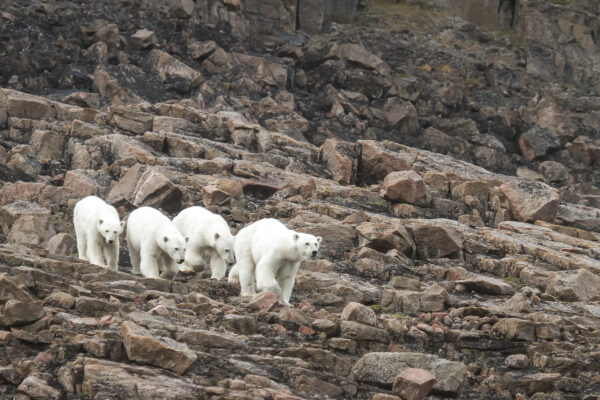 On Polar Bear Migration Fly-In Safari, you’ll take a chartered plane to a remote cabin located along the western shoreline of Hudson Bay, where polar bear mothers are guiding their cubs north to find autumn ice thick enough to begin their winter season on the sea-ice. Get up-close opportunities as bears walk right past the camp that is safely behind an unobstructed safety fence but offers remarkable photos. 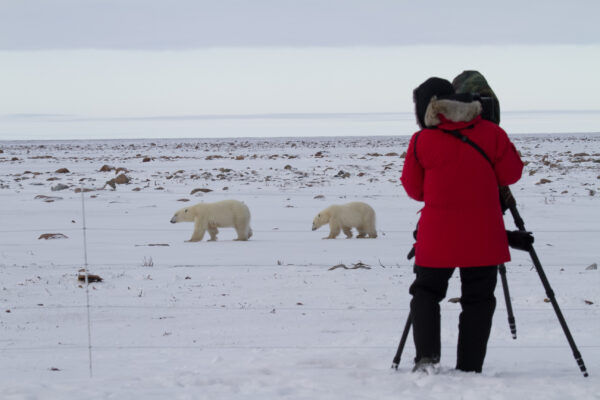 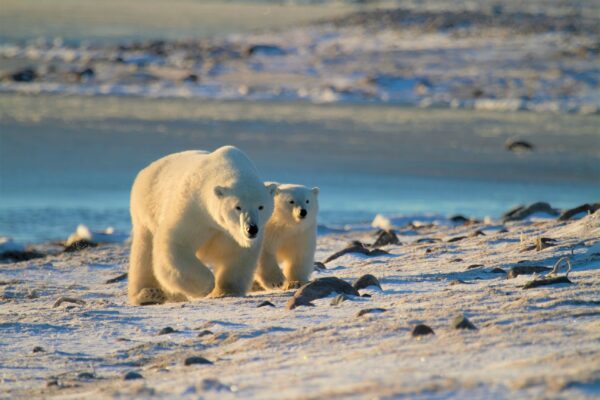