It’s coming to be the holiday season and for some of us, that means telling stories of Santa Claus and all of his trusted reindeer. But have you ever wondered why is it reindeer?

Today we will explore one reason they are synonymous with the greatest seasonal migration of all time and why this wandering animal pulls Santa’s sleigh. 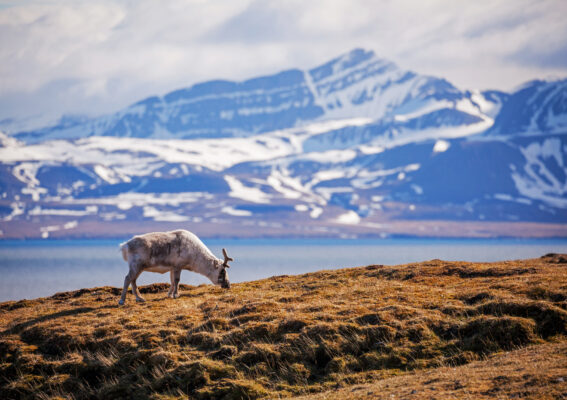 Why Reindeer Would Pull Santa’s Sleigh

Reindeer have become one of the most famous animals around the world considering how rarely people get to see them in the wild.

But these trim animals were chosen by Santa for a reason. They travel incredible distances each year in their own seasonal migrations.

Before we discover the seasonal migrations of these animals it’s important to make one quick note: Reindeer (in Europe) and Caribou (in North America) are actually the same species! However, the rangifer tarandus has a number of species that vary by their geography. They have evolved to succeed in these biospheres and are large contributors in shaping it.

Like the bison of the plains, caribou/reindeer have played an integral role in the lives of Indigenous Peoples across the Arctic. They provide much-needed resources for people living on Arctic tundra above the tree line. At the same time, the woodland reindeer have become a symbol of Scandinavia.

It is in Scandinavia that the connection to Santa Claus begins. Parts of northern Europe are some of the few places that this animal has been domesticated. They often take the work of horses in this frigid region. So, it is only natural that Kris Kringle, who originates from Scandinavia, would enlist reindeer’s help. 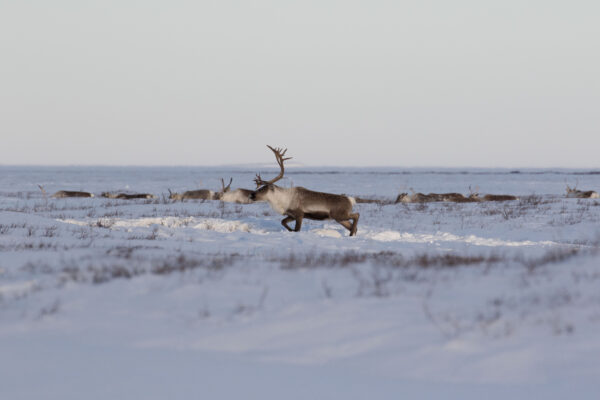 Surprisingly, there is one difference between European reindeer and North American caribou. Caribou have evolved to have longer legs because of the enormous distances they are able to roam in North America. The enormous open space and healthy environment allow them to cover vast distances compared to Europe’s smaller area.

It’s remarkable to see a gigantic herd of caribou take over an entire landscape. If you are lucky enough to see such a sight, it would be like a stream of fur and antlers occupying almost everything up to the horizon!

Our Expedition Leader describes a time they came across an enormous herd of caribou as an add-on to their trip:

“ had a young couple that rented a helicopter, and we saw the huge herd. We planted ourselves near them and had a great viewing. It was breathtaking.”

When you realize the distances they travel, it becomes understandable why these steadfast creatures are trusted with the Earth’s biggest journey on Christmas Eve. 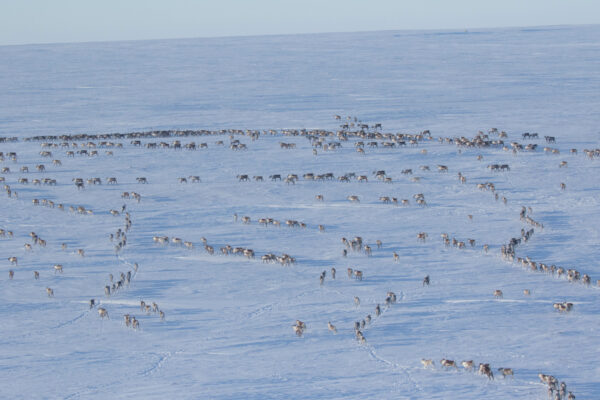 Your Chance to View Caribou

Our programmed safaris take you to three separate subspecies populations. While these trips don’t focus on caribou as primarily as they do polar bears, we explore the territory among the traditional migratory routes. That means you may see them on your plane ride to your location, and if you’re really lucky they may even wander past the camp.

Our Polar Bear Mother & Newborn Cubs Safari take you to northern Manitoba, where you can find the Woodland population. As you take photos of young polar bear families in Wapusk Park, caribou have been known to sometimes show up.

On Polar Bear Migration Fly-In Safari you will travel above the tree line near Arviat, Nunavut. This is home to the Barren-Ground population that roam the tundra. On the earliest departures, there are chances of seeing them before their migration moves past.

But if you are really interested in seeing caribou, we can make it happen!

Our Add-on option allows you to experience additional activities before or after your Safari. An example is renting a helicopter or charter a plane to look for caribou. Our years of experience in the area and working with local providers allow us to create remarkable opportunities to see some of the world’s most beautiful and icon animals. 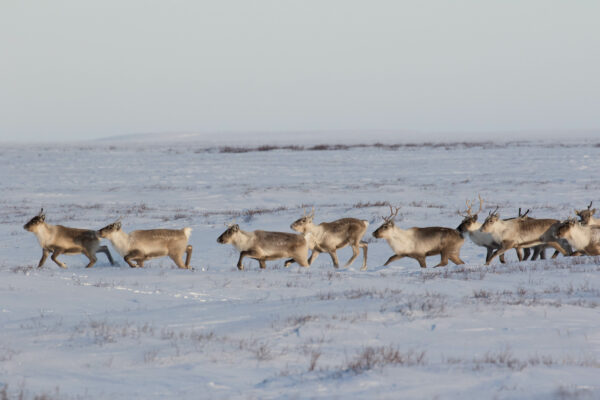